Nerves were settled when Neymar headed in from a corner in the 28th minute and left back Juan Bernat made it 2-0 just before the break. 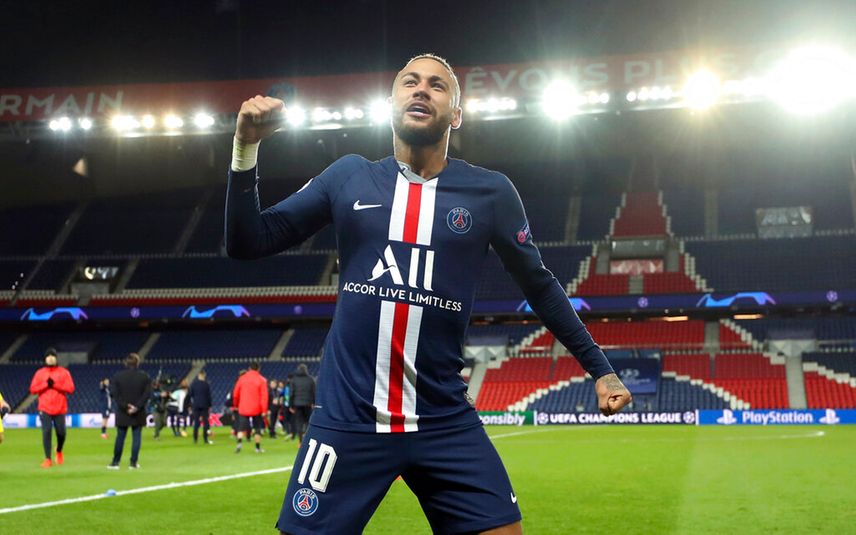 A 2-0 home win against Borussia Dortmund put PSG into its first quarterfinal since 2016, following a dismal away leg in which PSG could have lost more heavily than 2-1.

Last season, an injury-time penalty conceded at home to Manchester United sent PSG out in the last 16 for the third season running. PSG's players were on edge near the end at Parc des Princes.

When the final whistle went, their yells and screams of released frustrations echoed around an empty stadium. But masses of PSG fans were celebrating wildly outside, having loyally cheered them on all game despite not being allowed inside due to the coronavirus outbreak.

The players soon joined in with them, waving their shirts in the air at the crowd gathered below them.

After reaching a first quarterfinal since 2016, PSG's players have to go one step further and end a 25-year wait to reach the semifinals, which it has done only once.

PSG's poor performance in Germany three weeks ago raised the possibility of a fourth straight elimination in the last-16 stage.

Nerves were settled when Neymar headed in from a corner in the 28th minute and left back Juan Bernat made it 2-0 just before the break.

"We played like a team, reliable and together. We needed to show that," said PSG coach Thomas Tuchel, who said after the first leg that his players had looked scared.

Dortmund hardly resembled the side which dominated the first leg, however, and midfielder Emre Can was sent off near the end after shoving Neymar over.

It led to pushing and shoving from players on each side. Neymar was shown a yellow card as was teammate Ángel Di María, even though he was off the field.

"It was a good atmosphere in the bus when we arrived, with all the ultras (outside)," Tuchel said of the PSG crowd outside the stadium. "We were singing together in the bus. I wanted us to play with exactly this kind of energy."

PSG had a scare early on when Neymar went down clutching his right shoulder after falling down early on. Back on his feet, it wasn't long before he would score.

Goalkeeper Roman Bürki failed to claim Di María's corner from the right and Neymar — who netted in the first leg — dived forward to head in.

As Dortmund poured forward late on, there were some fraying nerves in the PSG side.

The players' reaction after the final whistle, with some whipping off their shirts and twirling them over their heads, made it seem like PSG had won the competition.

Tuchel danced up and down, captain Marquinhos screamed, players threw themselves onto each other in a bundle. Neymar buried his head in his hands and wept, and the players rushed to greet and applaud the fans still massed outside.

However, the game itself was hardly a massive test.

Forward Jadon Sancho hit a free kick straight at PSG goalie Keylor Navas late in the first half, and then wasted a chance moments later when his angled shot was stopped when a teammate was well placed to receive a pass.

Dortmund improved after the break but some neat approach play produced little threat, and Di María went close to making it 3-0 when his free kick was well saved in the 54th.

PSG center half Presnel Kimpembe, who came through the club's academy, celebrated for long moments after the game with the fans.

There was no holding back in the post-match scenes of jubilation, though.

Players filmed themselves on their phones in the dressing room, some dancing on a table with their tops off as drinks were sprayed around.