Manchester United were held at home by Everton on Saturday after Cristiano Ronaldo was dropped to the subs bench as Chelsea scored two late goals against Southampton to top the Premier League table. 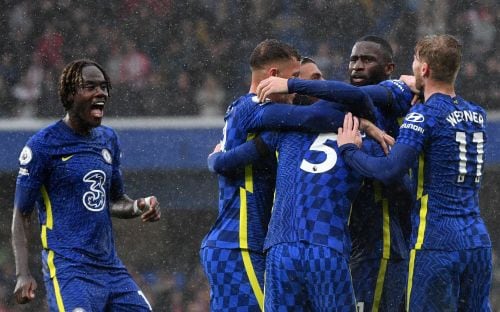 London: Manchester United were held at home by Everton on Saturday after Cristiano Ronaldo was dropped to the subs bench as Chelsea scored two late goals against Southampton to top the Premier League table.

Elsewhere, Brighton drew 0-0 with Arsenal to end the Gunners' recent winning streak while Leeds earned their first league win of the season.

United's 1-1 draw at Old Trafford continues an unimpressive run of home results including a League Cup defeat by West Ham and last week's shock Premier League loss at the hands of Aston Villa.

Ronaldo has scored five times in six games in all competitions since rejoining the club in late August but Ole Gunnar Solskjaer said he did not regret resting the 36-year-old -- who scored a dramatic stoppage-time winner against Villarreal in midweek.

"You make decisions throughout the season, you've got to manage the players' workload," said the Norwegian manager. "The decision was, for me, the correct one today.
"We have started better than last season, but it is still not what we wanted."

Everton created plenty of chances in the opening period but fell behind shortly before half-time when surprise pick Anthony Martial curled home his first Premier League goal since February from a Bruno Fernandes pass.

Solskjaer called on Ronaldo and Jadon Sancho 12 minutes after half-time as he looked to put the game beyond Rafael Benitez's men but Everton ruthlessly exposed United's frailty on the counter-attack.

Demarai Gray won the ball back on the left and freed Abdoulaye Doucoure into acres of space in midfield. Doucoure played in Andros Townsend to fire home his fifth goal in nine appearances.

Townsend performed a Ronaldo-style "Siuuu" goal celebration and said it was done in tribute to the Portuguese superstar, whom he said was his "idol".

Everton thought they had won it late on but Yerry Mina's close-range finish from a Tom Davies pass was ruled out for offside following a VAR review.

Chelsea ended a miserable week on a high, with Timo Werner and Ben Chilwell striking late in a 3-1 win against Southampton, who are still without a league victory this season.

The three points lifted the Stamford Bridge club to the top of the Premier League on 16 points, two clear of Liverpool, Manchester United, Everton and Brighton.

Thomas Tuchel's side, tipped by many to win the Premier League in the early weeks of the season, were well beaten by Manchester City last week and lost to Juventus in the Champions League in midweek.

But they returned to winning ways in London on Saturday, helped by a second-half red card for Southampton midfielder James Ward-Prowse.

Trevoh Chalobah nodded Chelsea into an early lead but Ward-Prowse levelled from the penalty spot just after the hour mark before he was sent off in the 77th minute for a dangerous tackle on Jorginho after a VAR check.

Werner provided the decisive moment, sliding in from Cesar Azpilicueta's cross before Chilwell volleyed in from close range on 89 minutes to secure the victory.

"After two defeats we had to be careful that we didn't start being too sad or too worried because there was a chance to be on 16 points," Tuchel told the BBC.

"It was important to have a better performance than the last two games, that we sharpened our mindset so that we are not afraid to lose. It was nice to play the way we did and get a deserved win."

Mikel Arteta's Arsenal were bottom of the Premier League table after three matches before three consecutive wins lifted them to the comfort of mid-table.

But they found it tough to break down high-flying Brighton in a soggy evening contest on England's south coast and Arteta admitted his team did not deserve to win.

Norwich stopped the rot against Burnley after six straight league defeats but they remain rock bottom of the Premier League table with just a single point from seven games after a 0-0 draw.