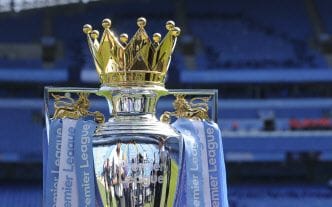 SGSA, the British government's advisor on safety at sports grounds, confirmed that football clubs in the top two tiers will have until October 6 to apply to participate in this trial. If approved, these clubs will be able to offer licensed standing areas from January 1, 2022.

"The licensed standing areas will be independently evaluated from their introduction in January for the remainder of the 2021/22 season. Other parts of the ground will remain all-seated and fans will be expected to sit in these areas," read a statement released by the SGSA.

After the Hillsborough disaster in 1989 which cost the lives of 97 Liverpool fans, the stadiums in English football's top two leagues have been requiring to be all-seaters since 1994, reports Xinhua.

"We know many fans want the choice to stand and, with the advent of new engineering solutions, our research has shown how this can be managed safely," said Martyn Henderson, Chief Executive of the SGSA. "Today's announcement will enable us to properly test and evaluate licensed standing areas before the government decides its next steps."

Clubs will have to meet several criteria to receive approval to have licensed standing areas. For example, seats with barriers or independent barriers must be in both home and away sections. Fans must be able to sit or stand in the licensed area. There must also be one seat or space per person.