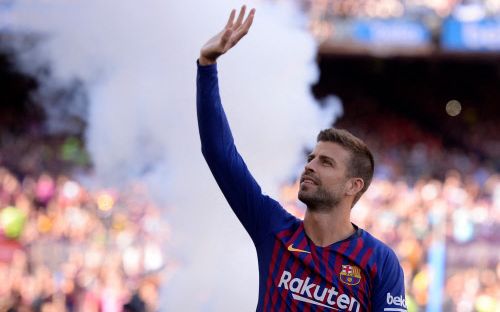 Barcelona: Gerard Pique played his last game at Camp Nou on Saturday in Barcelona's 2-0 win over Almeria and told fans he would be back during an emotional speech.

The 35-year-old centre-back, who has won 30 trophies with the club, including three Champions League titles and eight La Ligas, will retire from football after Tuesday's visit to Osasuna.

Pique, who was cheered by fans throughout the game after more than 14 years in Barcelona's first-team squad, enjoyed a lap of honour at the end of the game and was tossed into the air by his team-mates, as over 92,000 fans stayed in Camp Nou to pay homage to him.

"Thanks to my team-mates, the staff and everyone who helps us to make everything so easy," Pique said in a speech to the supporters after the game.

"To the board as well, for these years. When you get older, sometimes loving is letting go.

"After a relationship of such love and passion, I think it was the moment to leave some space, to give some air. I am sure in the future I will be back here again.

"It's not a goodbye. I left after 17 years to get some air. My grandfather made me a club member. I was born here and I will die here."

Pique, who won the 2010 World Cup and 2012 Euros with Spain, shed tears during his speech, and also kicked a ball around on the pitch with his children as fans finally departed.

He received some individual accolades at a private reception in Camp Nou from president Joan Laporta and the board, before speaking on television again.

"Your career is a lot of years, games titles, but what you keep with you are the friendships, the nights, playing in the World Cup, the Euros," Pique told DAZN.

"The trophies are there, they are a number, they are metal, but what stays with you are the friendships."

The defender, who has previously said he would like to be Barcelona president in the future, said he would take some time away from the club, but again pointed out a return was inevitable.

"I've got a thousand things to do, I'll get organised," said Pique, who has already moved into sport related business.

He is a founder and president of Kosmos Holdings which has revamped the Davis Cup in tennis, is involved in lower-league football clubs in Spain and Andorra and has bought some international football TV rights.

"This is my home, at some point I will return. It's the moment to part ways for a time and come back stronger. I'll enjoy some time with my family and friends, I'm looking forward to starting my new life.

"(Being replaced) was a weight off my shoulders, the last few months have not been easy. I go with the satisfaction that I've given everything.

"Sometimes it goes better, sometimes worse, but I've given everything. That makes me proud. I'm leaving calmly, happily, with my homework done."

When he was replaced in the final stages of the game, each of his team-mates embraced him on the pitch one by one, as fans chanted his name.

"Gerard leaves a spectacular legacy, he has turned the club into one of the greatest in the world, he has gone out of his way for the club," Busquets told DAZN.

"He has made history. He's an example of what a Barca player is, and what you have to do."

Ousmane Dembele and Frenkie de Jong's strikes earned Barcelona a victory which put them top of the league, at least until Real Madrid face Rayo Vallecano on Sunday.

Pique's departure came after a spell in which the defender had been criticised for some of his performances, and had dropped to fifth-choice centre-back.

Fans have praised the Catalan defender for leaving, amid a period of generational change for Barcelona, with president Joan Laporta saying Pique's departure will also save the club money as they look to reach a contract termination deal.

Other veteran players, including Busquets, who is out of contract at the end of the season, and Jordi Alba, will follow sooner or later.

"It's not up to me to have a goodbye like this, I've been a Barca fan all my life, I've had more or less the same trajectory (as Pique)," said Alba.

"I would be happy with what Geri had, that's for sure. The fans have always respected us and when a player of that quality leaves, they show it. I hope when I go, and may that be as late as possible, that it's like Geri's."