'Overconfident' Liverpool edge through despite defeat to Inter 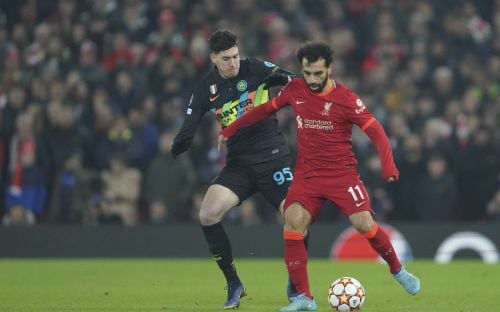 'Overconfident' Liverpool edge through despite defeat to Inter I AFP

Liverpool: Mohamed Salah admitted Liverpool might have suffered from complacency as they crept into a fourth Champions League quarter-final in five years despite a rare 1-0 defeat at Anfield to Inter Milan on Tuesday.

The Italian champions were unable to scale the mountain they had to climb after losing the first leg 2-0 at home three weeks ago despite Lautaro Martinez's sensational strike into the top corner just after the hour mark.

Alexis Sanchez's red card shortly afterwards punctured any Inter momentum and Liverpool comfortably held out with the extra man despite slipping to just a third defeat in 44 games in all competitions this season.

The Reds had been on a 12-game winning run to keep alive their hopes of a historic quadruple of trophies.

After lifting the League Cup last month, Jurgen Klopp's men are now into the last eight of both the Champions League and FA Cup and have a game in hand to cut Manchester City's six-point lead at the top of the Premier League.

And Salah hopes they can learn from a rare off night in front of goal as they failed to score for just the fourth time this season.

"We lost the game and maybe that will give us a push," said the Egyptian, who hit the post twice in the second half with glorious chances.

"Maybe in the back of our minds we were overconfident. It's a good game for us to learn from."

Inter were left to rue conceding two late goals in Milan three weeks ago after they had enjoyed the better of the game for much of the first leg.

"We've got to this stage for the first time in 10 years. We played against the strongest team in Europe in this time & were their equals," said Inter boss Simone Inzaghi.

"Sometimes it just takes a single episode to change the course of a game."

The Italian champions again controlled the first half, but Liverpool had the better chances as Joel Matip crashed a header off the bar before, from the resulting corner, Virgil Van Dijk's goalbound effort was deflected wide.

After a subdued first 45 minutes, Liverpool were fired up by Klopp at the break and should have taken the lead on the night minutes after the restart when Salah turned a loose ball inside the box onto the post.

At the other end, Martinez looked to have wasted the chance to get Inter back in the tie when he dragged a shot wide from the edge of the area.

But the Argentine made amends in spectacular fashion when he arrowed an effort into the top corner from outside the box on 62 minutes.

Inter's joy lasted barely a minute before they were reduced to 10 men by Sanchez's ill-discipline.

The Chilean had been lucky to escape with just a yellow card for a dangerous lunge on Thiago Alcantara just before half-time and stupidly dived in on Fabinho to earn a second yellow.

Salah hit the post again 15 minutes from time and only an incredible block from Arturo Vidal denied Luis Diaz in stoppage time as Liverpool failed to make their numerical advantage count.

"I think over the two legs it is completely fine they won one, we won one, and we are through," said Klopp. "We could have done better against an opponent who makes life really uncomfortable." AFP