Manuel Onwu scored a hat-trick while Martin Perez Guedes also got his name on the scoresheet from the penalty spot. An own goal by Narayan Das, a brilliant finish by Messi Bouli and two penalties by Bartholomew Ogbeche resulted in the game finishing 4-4. 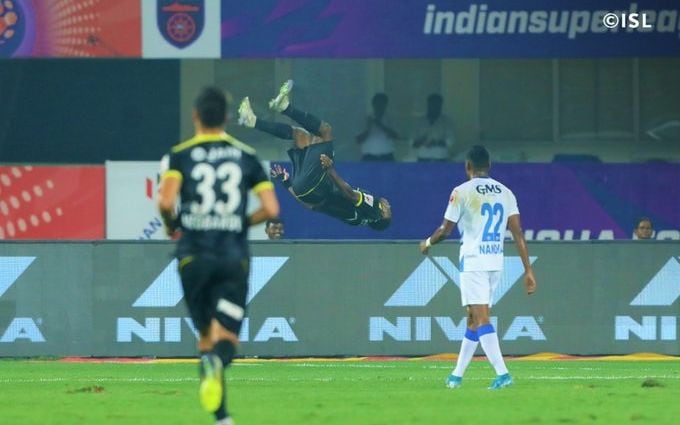 Bhubaneswar: Odisha FC and Kerala Blasters FC shared the spoils after an eight goal thriller in the penultimate league match of the Indian Super League at the Kalinga Stadium here on Sunday.

Manuel Onwu scored a hat-trick while Martin Perez Guedes also got his name on the scoresheet from the penalty spot. An own goal by Narayan Das, a brilliant finish by Messi Bouli and two penalties by Bartholomew Ogbeche resulted in the game finishing 4-4.

The game got off to a blistering start with Odisha FC scoring in the first minute. Jerry Mawihmingthanga got the ball on the right and whipped in a lovely inviting ball for Manuel Onwu. The striker made a run and got on the end of the cross. Onwu headed the ball into the back of the net leaving Bilal Khan completely flat-footed.

It was a tight decision regarding offside but the flag stayed down. Replays showed that the striker was offside by fine margins.

Kerala Blasters equalized from an own goal in the 6th minute. Messi Bouli played a one-two with his skipper Bartholomew Ogbeche on the left flank and got to the byline. Bouli put in a low cross towards the six-yard box looking for Ogbeche. Narayan Das gets on the end of the cross to clear it away but he miscued and the ball rocketed into the back of the net.

Messi Bouli gave Kerala the lead in the 28th minute Gianni Zuiverloon got the ball in the middle of the park and passed it to Jessel Carneiro on the left. Carneiro put in a cross towards the far post. The defender there fails to get the ball away and it falls at the feet of Messi Bouli. The striker controlled the ball with his left foot and hit it fiercely into the back of the net with his right.

Onwu equalised in the 36th minute with a wonderful free kick after Ogbeche brought down Vinit Rai on the edge of the penalty box. Onwu curled the ball away from the goalkeeper and into the top left corner. It was very well taken from the Odisha striker.

Odisha were awarded a penalty in the 44th minute after Raju Gaikwad brought down Onwu. Martin Guedes stepped up and slotted the ball into the bottom left corner and into the side netting. Bilal Husain Khan dives the right way but the penalty is superbly placed.

Onwu completed his hat-trick from another free kick in the 51st minute. A long ball came towards the box and Bilal Khan came off his line to collect it. However, he caught the ball outside the box and a free-kick was awarded to Odisha. Bad play by the goalkeeper who was shown a yellow card as well.

Manuel Onwu again stepped up to take it. This time though, the Spaniard went for raw power and slammed the ball towards the left side netting of the goal. Odisha got their two goal cushion.

Odisha keeper Francisco Dorronsoro made a good save here to deny Messi Bouli in the 67th minute.

Bartholomew Ogbeche pulled a goal back for Kerala from the spot in the 82nd minute. Shubham Sarangi tried to steal the ball from Ogbeche but ended up bringing down the Kerala Blasters captain with his foot. The referee awarded a penalty. Ogbeche stepped up and fired home with ease.

Blasters were awarded another penalty in injury time after Odisha keeper Francisco Dorronsoro brought down Ogbeche inside the box. The Blasters captain stepped up again and ensured that his 100 percent record from the penalty spot remained intact.

The brace also helped Bartholomew Ogbeche become the league’s top scorer for the time being with 15 goals from 16 games.

With nothing to lose and nothing to gain, both teams went all out and it was a goal fest. Odisha FC finished 6th with 25 points from 18 games while Kerala Blasters finished the season in 7th spot with 19 points.