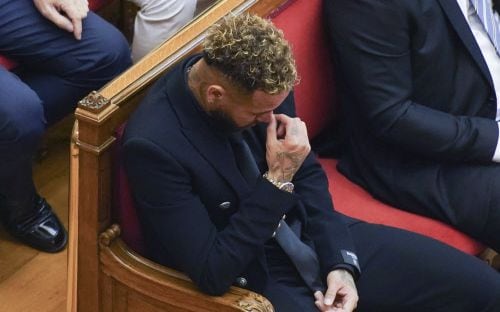 Neymar sits in a court in Barcelona I AP

Barcelona: A few hours after scoring the winning goal in Paris Saint-Germain’s victory over Marseille in the French league, Neymar arrived in court in Spain on Monday to face a trial for alleged irregularities involving his transfer to Barcelona in 2013.

Neymar’s parents, former Barcelona president Sandro Rosell and representatives for both the Spanish club and Brazilian team Santos are also set to appear in court after a complaint brought by Brazilian investment group DIS regarding the amount of the player’s transfer.

All defendants have denied wrongdoing.

The Brazil striker arrived at the court in Barcelona wearing sunglasses and a black suit and tie. Neymar's father, who also is his agent, was among those arriving alongside the player.

The trial comes nearly a month before the World Cup opens on Nov. 20 in Qatar. It is expected to last until the end of the month.

On Sunday, Neymar scored his ninth French league goal of the season in first-half stoppage time to lead PSG to a 1-0 win over Marseille in French soccer’s biggest game.

Neymar and the rest of the defendants have to be in court for the first day of the trial, but the player is only expected to testify on Friday.

DIS was entitled to 40% of Neymar’s transfer but said it received a smaller compensation because part of the transfer fee was concealed. Prosecutors said those involved tried to hide the real amount of the transfer in order to pay a lower commission to the investment group.

Neymar and his father previously appeared in court in Madrid a few years ago because of the accusations.

Neymar’s move from Santos also got Barcelona in trouble with Spain’s tax office. In 2016, the Catalan club paid a fine of 5.5 million euros ($5.3 million now) to settle a separate case brought by authorities. In that settlement, the club acknowledged it had made “an error in the fiscal planning of the player’s transfer.” AP