The former Germany striker's contract will run until June 30, 2021. Furthermore, 31-year-old Danny Rohl's contract as assistant coach has been extended to June 30 2023. 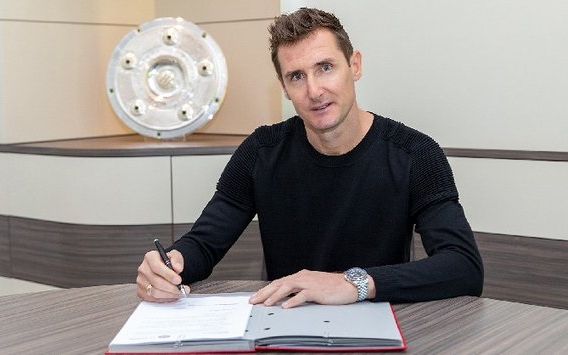 The former Germany striker's contract will run until June 30, 2021. Furthermore, 31-year-old Danny Rohl's contract as assistant coach has been extended to June 30 2023.

"It feels very good, I'm very much looking forward to the task. Hansi Flick and I have known each other very well since our years together in the German national team. We trust each other, both professionally and personally.

"For me this is the next step in my career as a coach. I hope that I can use my experience to make an important contribution in helping FC Bayern achieve our sporting goals," said Klose in an official statement.

Klose will be on the Bayern bench when the Bundesliga restarts on May 16 after having been suspended since mid-March due to the coronavirus.

"With his experience as a former professional at the highest international level, Miro is the perfect addition to our coaching team," said Flick.

"We have known and appreciated each other for a very long time and were able to celebrate great successes together with the national team," he added.

Klose, 2014 World Cup winner and the leading World Cup goalscorer of all time, has coached the German record champions' U17 juniors for the past two years and won the U17 Bundesliga South/Southwest regular season championship with his team in 2019.

From June onwards, Klose will also attend the DFB Academy's A-licence training course. The 41-year-old played for FC Bayern from 2007 to 2011.