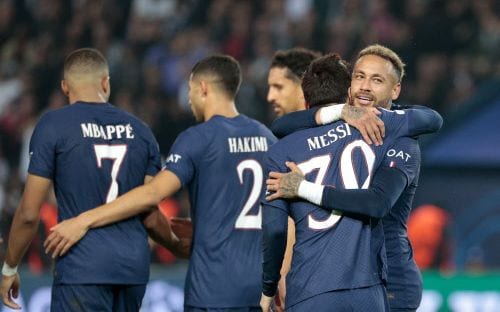 Paris: Kylian Mbappe and a Lionel Messi in vintage form both scored twice as Paris Saint-Germain crushed Israel's Maccabi Haifa 7-2 on Tuesday to secure a place in the last 16 of this season's Champions League with one group game to spare.

Neymar was on target too, and the Brazilian also forced an own goal from Maccabi defender Sean Goldberg before Carlos Soler completed the rout as the Parisians netted seven times in a Champions League game for the first time since November 2017.

The win means PSG have qualified from Group H along with Benfica, although it will go down to next week's final matchday to decide who advances in first place and therefore benefits from a theoretically kinder draw in the next round.

"It was a great evening. The team played fantastic football, between the defenders and midfielders and the three attackers, who were fantastic," said PSG coach Christophe Galtier.

"There was a great connection between them."

Maccabi Haifa, who saw Senegalese defender Abdoulaye Seck score both of their goals, are eliminated along with Juventus but the Israeli champions could still pip the Italian giants to third place and Europa League football after the break for the World Cup.

"We were up against the best players in the world and they proved it tonight."

The upcoming World Cup in Qatar is surely a factor in the outstanding early-season form of Messi and Neymar in particular, and along with Mbappe they turned on the style to leave Maccabi regularly looking dazed and confused in defence.

Mbappe's latest goals -- his fifth and sixth in this season's Champions League taking him to 16 in all competitions -- came a day after reports emerged in France of the eye-watering details of his new contract at PSG.

Newspaper Le Parisien reported on Monday that the Qatar-owned club were paying the France striker a total of 630 million euros ($627.8m) before tax over the duration of the three-year deal he signed in May.

The net sum would be slightly less than half that amount, although PSG dismissed the reports as "sensationalist".

The figures reported are higher than the 555 million euros gross that Messi was reported by Spanish daily El Mundo to have earned over his final four years at Barcelona.

After a difficult first season in Paris, Messi is now looking more like the player he was in Catalonia and he opened the scoring here in the 19th minute.

Mbappe laid the ball back to the Argentine who took a touch before sending a shot across goalkeeper Josh Cohen and into the far corner of the net with the outside of his left boot.

Mbappe then needed treatment after being sent crashing into the advertising boards by Seck, but he quickly recovered to make it 2-0 just past the half-hour mark with a beautiful curling strike into the same corner.

It was from virtually the same spot in the box that Neymar made it 3-0 after being set up by Messi, but the Israelis did then pull one back as Seck headed in from an Omer Atzili dead-ball delivery.

Then came what was probably the night's outstanding goal, as Messi linked up brilliantly with Mbappe before jinking his way into a shooting position and burying a shot into the bottom-left corner.

It was his 11th goal of the season, meaning he has now matched his tally for the whole of the last campaign.

The goals kept coming after half-time, albeit not for Messi.

Seck pulled a second goal back with a looping header over Gianluigi Donnarumma, but then Mbappe made it 5-2 as he controlled Achraf Hakimi's cross and whipped a stunning shot into the far corner from the left side of the box.

The unfortunate Goldberg gave PSG their sixth and Messi crashed a shot off the bar before substitute Soler put the seal on the victory. AFP