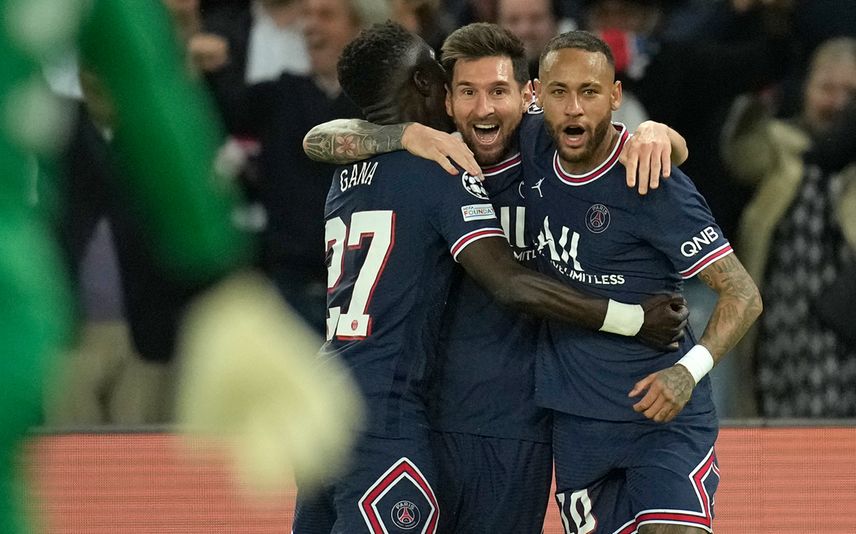 It was for Argentina against Estonia, however, not for Paris Saint-Germain, where he scored only six league goals in 26 games following his move from Barcelona. It was Messi's lowest tally since the 2005-06 season, when he was still only 18.

Although his 14 assists for PSG were the second highest in the league behind teammate Kylian Mbappe, the record seven-time Ballon d’Or winner's form fell well below expectations for a player who scored 672 goals for Barcelona.

That eye-popping total included an extraordinary 50-goal league season in 2012 to go along with 46 in 2013, eight Spanish league scoring titles and six in the Champions League. At his very best, he scored five against Bayer Leverkusen in 2012.

Fast forward a decade and his poor goal tally for PSG raised questions whether he could adapt to a new system after so many years where fantastic players like Andres Iniesta, Xavi Hernandez and Neymar played primarily for him.

“The idea for him is to be more involved in the game and have teammates bond with him during games, which didn’t happen much last season. The more the team is connected, the more the team produces," incoming PSG coach Christophe Galtier said. “From what I’ve seen, he’s totally invested. As for the rest, the whole world knows what he can do."

Yet while last season was difficult for Messi, some have wondered if he has been holding back for this year's World Cup.

At 35, it will most likely be his last chance to win it with his beloved Argentina. The tournament’s unique timing of Nov. 21-Dec. 18, in order to avoid the summer heat in Qatar, also means he will arrive with much fresher legs than if it was held in June and July.

Messi was inspirational in leading Argentina to the Copa America title last year, finishing co-top scorer with four goals and leading with five assists. It ended Messi's tortuous wait for a major international trophy after losing one World Cup final and three other Copa America finals.

So he will be hugely motivated to perhaps sign off from the international game with the biggest trophy of all.

A strong start for PSG could set him up well for success in Qatar, in a strong Argentina attack featuring Juventus winger Angel Di Maria and Inter Milan forward Lautaro Martinez.

Di Maria’s absence hurt Argentina when it lost the 2014 World Cup final to Germany 1-0, but his departure from PSG could actually help Messi at club level.

Galtier also sticks to formations more than the experimental Pochettino, which should favor Messi.

Messi was also perhaps a victim of his own versatility last season and won’t be moved around so much under Galtier. It means he won’t have to share a position on the flank with Di Maria and likely will move inside less to dovetail with Mbappe, whose most dangerous position is at center forward.

PSG will be best served if Galtier picks Neymar and Messi on either side of Mbappe in a fixed three-man attack, with astute passer Marco Verratti in an advanced midfield role.

Messi started the season with a goal as PSG beat Nantes 4-0 to win the Champions Trophy on Sunday.

PSG’s central defense has been strengthened by the arrival of Nordi Mukiele from German club Leipzig. It should take some pressure off the midfield and free up Verratti to combine higher up the field with Messi to open up defenses.

With Messi probing from the right, operating more as a creator in a system where Mbappe holds the role as the main scorer, he should be able to save energy.

That could be good news for Argentina.

PSG remains the favorite and does not appear to have a serious challenger, much like last year. The fight for second place and automatic entry into the Champions League is likely to be between Marseille, Monaco and Lyon.

Marseille has a new coach in Igor Tudor but is still perhaps too reliant on the old legs of playmaker Dimitri Payet.

Monaco excelled under attack-minded coach Philippe Clement last season. But much like Marseille, the club relies too much on one player, France forward Wissam Ben Yedder.

His 25 league goals last season were second only to Mbappe's 28. AP