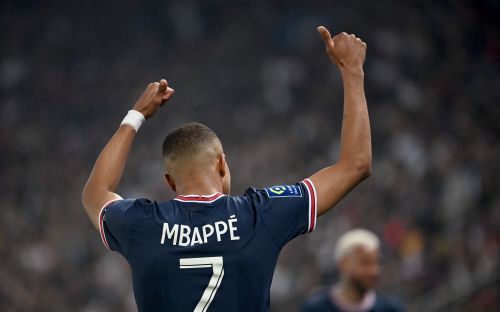 Kylian Mbappe celebrated a new-three year deal to stay at Paris Saint-Germain with a hat trick for the French champions against struggling Metz on Saturday, taking his league-leading tally to 28 and his PSG total to 171.

By this time next season, he may well pass Edinson Cavani's club record of 200 goals.

Elsewhere, there were euphoric scenes for PSG’s bitter rival Marseille after it routed Strasbourg 4-0 to secure second place and automatic entry into the Champions League.

Marseille finished two points ahead of third-placed Monaco, which enters the Champions League qualifying rounds after its nine-match winning run ended with a 2-2 draw at Lens.

Monaco was 2-1 up, thanks to Wissam Ben Yedder's 25th league goal, with Marseille needing to win 5-0 to overtake on goal difference. Marseille scored deep into injury time for 4-0 and had two minutes left to get a fifth.

But suddenly the chase was over.

In Paris, Mbappe stole the show while one of his trusted teammates signed off in style.

There will be many more for Mbappe, who confounded expectations by turning down the chance to join Real Madrid.

“I would like to announce that I have chosen to extend my contract and of course I am delighted," Mbappe said. “I am convinced that I can continue to grow.”

Rennes also equalized deep into injury time at Lille to make it 2-2 and take fourth place — and Europa League qualification — away from Nice on goal difference. Nice rallied from 2-0 down to win at Reims 3-2 thanks to striker Andy Delort's seven-minute hat trick late in the game.

Veteran winger Romain Hamouma's 79th-minute goal earned a 1-1 draw at Nantes to push Saint-Etienne into 18th place and the promotion-relegation playoff — at least a shot at staying up.

PSG sent Metz down along with Bordeaux, which showed some pride in winning at Brest 4-2 but conceded 91 goals in a terrible season for the six-time champion.