Maradona's legend shaped by his ‘Hand of God’

The two most famous of Maradona’s goals came within four minutes of each other on June 22, 1986 in Mexico: one was voted Goal of the Century, the other is even more famous. 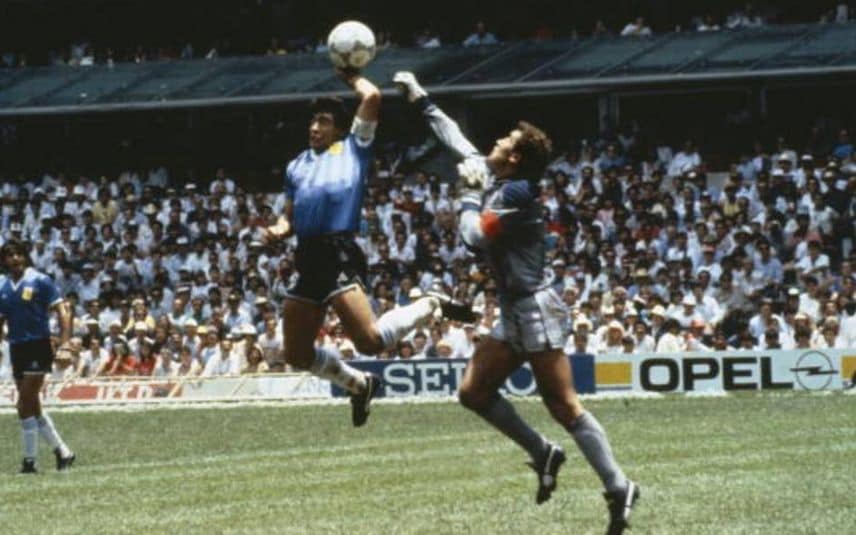 Buenos Aires: Diego Maradona scored more than 300 goals, many touched with genius, but the two most famous came within four minutes of each other on June 22, 1986 in Mexico: one was voted Goal of the Century, the other is even more famous.

Maradona and Argentina arrived at that World Cup with something to prove. Four years earlier in Spain, Maradona's first World Cup had ended with early elimination and a red card for a spectacular foul against Brazil.

In Mexico, Argentina cruised through their group, edged past old enemies Uruguay in the last 16 and then faced England, an enemy of a different kind, in the quarter-finals at the vast Azteca Stadium.

Maradona has given repeated accounts of that match: in his autobiography 'Maradona'; in a book with Argentine journalist Daniel Arcucci on that World Cup called 'Touched by God', and in interviews.

The language may be more or less colourful, but the details remain the same.

Maradona remembered the humiliation of the Falklands War -- over the British-owned archipelago in the South Atlantic known in Spanish as the 'Malvinas' -- four years earlier, when Argentina surrendered to the British shortly after the start of the World Cup in Spain.

"It was England, let's not forget, and the 'Malvinas' were fresh in the memory," he said. "It was a battle, yes, but on my battlefield."

The first half was cagey. "I was bored stiff," his team-mate Jorge Valdano wrote in The Guardian 20 years later. "Eleven functionaries on each side trying not to make a mistake."

That changed in the 51st minute. Maradona beat three men in midfield. Finding his way blocked, he pinged a pass to Valdano and set off in anticipation of a return.

Steve Hodge stole the ball. The back-pass to the goalkeeper was still legal and that's what the England midfielder tried.

"The ball bounced nice," he said later. "I caught it absolutely spot on. It was the contact I wanted, looping it back with a bit of dip. When I caught it, I didn't have a moment's thought that it could be a problem, because I didn't know where Maradona was."

Maradona, as usual, was thinking faster than anyone else and racing toward goal as Peter Shilton advanced to catch the ball.

"It floated down to me like a little balloon. Oh boy, what a treat," said Maradona. "Shilton thought I was going to hit him. But I jumped like a frog."

Maradona was some seven inches (18 cm) shorter than the England goalkeeper.

"If you look at my feet, you'll see that I'm already in the air, moving upward. I keep moving up, and he hasn't even left the ground," Maradona said. "I got an idea, to put my hand and my head in."

Maradona's left hand flicked the ball between Shilton's open arms and into the goal.

"The one who realised what happened was (Terry) Fenwick," said Maradona. "But apart from him, nothing, no one else."

When the England defender appealed, the BBC commentator, Barry Davies, assumed it was for offside. Even the celebration was part of Maradona's deception.

"I kept on running, never looking back," he said.

Argentina manager Carlos Bilardo had forbidden midfielders to waste energy running to join celebrations. Maradona waved his team-mates toward him.

"This time, I needed them. I really did. "(Sergio) 'Checho' Batista was the first one to come over, but slowly.

"He asked me: 'Did you use your hand?' I told him 'Shut the fuck up and keep celebrating!' We were still afraid they would disallow the goal."

"As a kid in Fiorito I would score goals with my hand all the time. And I did the same thing in front of a hundred thousand people, but no one saw it," he said.

"All they saw was the screaming after I had scored. And if they screamed that loud, it was because they were sure I had scored. So how could we possibly blame the Tunisian ref?"

Maradona says his other handball goals included several in Argentina and two for Napoli.

He said that once in Argentina, "many years before Mexico", he was caught and the referee "advised me not to do it anymore; I thanked him, but also told him I couldn't promise him anything. I imagine he was celebrating like crazy against England."

Maradona came up with the phrase 'Hand of God' at the post-match press conference.

"At first, I kept saying that I had headed it in. I don't know, I was scared that since I was still in the stadium, they might disallow the goal. What did I know? In passing I said to someone, 'It was Maradona's head and God's hand'."

Hodge exchanged shirts at the end, but other English players remain less forgiving.

"Shilton did get mad," said Maradona. "He said, 'I'm not going to invite Maradona to my testimonial. Ha! Who wants to go to a testimonial for a goalie?"

Four minutes later, Maradona ran more than half the length of the field, beat six England players and scored the Goal of the Century. It was also the match-winner.

But his first goal, athletic, cunning and illegal, remains the more discussed.

"We shouldn't forget that we were Argentinians, representatives of a country that rationalises with the word 'exuberance' what in other places is called cheating," wrote Valdano.

Maradona remained unrepentant. "Of course, it was not the Hand of God. It was me. I am not sorry for scoring with my hand. Not sorry at all! For me, it was like stealing from a thief."