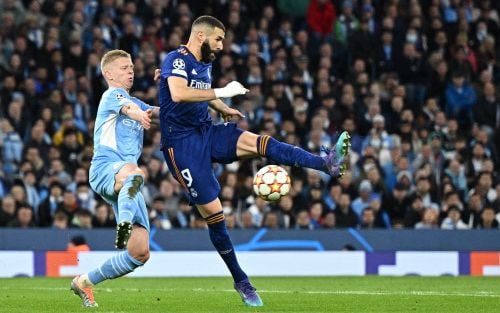 Manchester: "We have to do a magical thing," said Karim Benzema after Real Madrid performed another Houdini act in the Champions League to escape only 4-3 down from Tuesday's thrilling semi-final, first leg against Manchester City.

Benzema set up what should be a special night at the Santiago Bernabeu on May 4 by scoring twice to take his tally for the season to 41 goals in as many games.

Without the Frenchman, Madrid's quest for a 14th European crown would have long since sunk.

Benzema scored hat-tricks against both Paris Saint-Germain and Chelsea in the past two rounds as Real walked a tightrope to reach the last four for the 30th time.

By contrast, this was just City's third trip to the semi-finals, but the English champions justified their status as tournament favourites on the night the Etihad Stadium may finally have warmed to the Champions League.

The competition's anthem was again lustily booed before kick-off by City fans who have not forgotten the financial fair play charges laid against their club by UEFA.

Had City not successfully appealed to the Court of Arbitration for Sport, they would have been banned from the Champions League for the past two seasons.

Instead, they are 90 minutes away from reaching the final for a second consecutive season.

It was the first time the City fans had something to cheer in a semi-final.

When the sides met at this stage in 2016, Madrid edged a cagey tie 1-0 on aggregate.

Last season, City swept aside Paris Saint-Germain but in front of empty stadiums due to coronavirus restrictions.

This time it took just 10 minutes for Madrid to be clinging on to stay in the tie.

Riyad Mahrez and Phil Foden should have put Real out of sight, but PSG and Chelsea had similar regrets only to be stung by the survival instincts of Carlo Ancelotti's men.

"When you lose it isn't good," said Ancelotti, dismissing suggestions he should be pleased to have escaped still alive in the tie.

"It is easy to read this game, we were good on the ball and bad without it."

- The holy grail -
Once again it was left to Benzema to dig Los Blancos out of the mire by halving the deficit before half-time.

A wild second half raged from end to end as Foden and Bernardo Silva extended City's advantage, only to be pegged back by Vinicius Junior's stunning solo run and finish before Benzema had the final word from the penalty spot.

"No one can say they didn't enjoy it," said Guardiola. "It was a good advertisement for football."

That same year City began their Champions League journey, backed by the wealth of Abu Dhabi that has made them the dominant force in English football over the past decade.

There has been much frustration at the failures along the way, particularly when Guardiola has at times tried to be too clever by half.

But the sight of Madrid being put to the sword with the eyes of the world on the Etihad was why City have invested so much to bring the Spaniard to east Manchester and keep him around longer than he has stayed at any other club.

"There is not one complaint about the result, the performance," added Guardiola. "I'm so proud and incredibly happy with the way we performed."

The ultimate test of whether City are ready to win the Champions League awaits next week when the cauldron of the Bernabeu will expect another Real revival. AFP