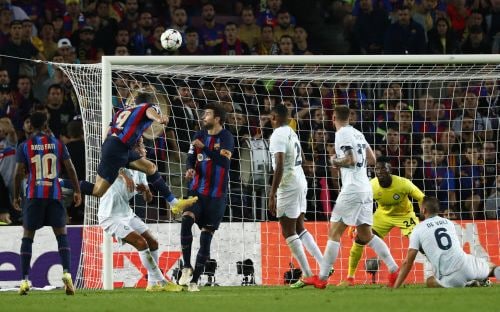 Barcelona: Robert Lewandowski scored two late goals to save Barcelona from elimination in the Champions League in a thrilling 3-3 draw with Inter Milan on Wednesday at Camp Nou.

The Polish forward dragged Xavi Hernandez's side level at 2-2 in the 82nd minute and then again at 3-3 in stoppage time with a towering header, after Robin Gosens put the Italians ahead with one minute remaining.

Barcelona's Champions League fate is no longer in their own hands though and they still face a second consecutive group stage elimination if Inter Milan win at home against eliminated Viktoria Plzen on October 26.

Being on the verge of another early knock-out is a bitter blow for the Catalans, who hoped a summer signing spree including Lewandowski from Bayern Munich could restore their position among Europe's elite.

"We're depending on another team to go through. They are our mistakes, we have to improve them. That's the reality. The (improvement) process is longer than we thought in Europe.

"There are other competitions, La Liga, the Copa del Rey, the Super Copa. We have to insist, persist, believe."

The hosts made the early running but Lautaro Martinez flashed a warning shot into the side-netting on the counter attack, with Inter sitting deep but ready to spring forward.

Lewandowski, in search of his first goal in three games, had a header cleared off the line and at the other end Edin Dzeko hit the crossbar.

Raphinha was frustrated after skewing a volley wide but his work-rate proved crucial when Barcelona broke the deadlock. The Brazilian winger chased a ball down in the corner and fed Sergi Roberto, who cut the ball across for Dembele to blast home from close range.

Inter stewed on the goal at half-time and quickly produced one of their own, netting in the 50th minute after Gerard Pique played Nicolo Barella onside and the Italian rifled home.

The Inter midfielder snuck behind Pique, who waved a cross past him, towards Ter Stegen, not reading Barella's movement.

The defender, 35, was starting his first Champions League game of the season, with Barcelona paying the price for Jules Kounde, Ronald Araujo and Andreas Christensen's injuries.

"They didn't come out switched-on enough in the second half, that is a coaching error," said Xavi.

"When you draw at home with these fans, with this atmosphere, it is my fault. I am angry. My feeling is that this competition has been, and is still being, cruel with us."

It was another of the team's veterans who gave the ball away for Inter's second goal, with Sergio Busquets conceding possession with a stray pass. Hakan Calhanoglu found Martinez, and the Argentine striker left Eric Garcia for dead and slammed home via the post.

"We made errors that at this level, you cannot make," admitted Garcia.

Eventually Lewandowski got his goal with a deflected strike at the second attempt after substitute Alejandro Balde found him in the area.

Gosens thought he had handed Inter qualification and eliminated Barca when he struck late on from Martinez's cross, on yet another counter-attack, but Lewandowski had other ideas.

The striker's towering header saved Barcelona from certain elimination, but their future in the competition still hangs by a fraying thread.

"I think that Barca are a very great team with a great coach. The problem is that Barca met an Inter in these games, an Inter at the right level, organised, determined," said Inter coach Simone Inzaghi.

"In the second half we played well and we deserved to win the game. We created many chances, we hit the bar, there were some very big saves."

There is little time for Barcelona to pick themselves up and dust themselves down. On Sunday, Real Madrid beckon at the Santiago Bernabeu in La Liga. AFP