Real Madrid's lead at the top of La Liga was cut to four points over Sevilla, as Carlo Ancelotti's side were held to a 0-0 draw away to Villarreal while second-placed Sevilla beat Elche in Spain's 24th round of games this weekend. 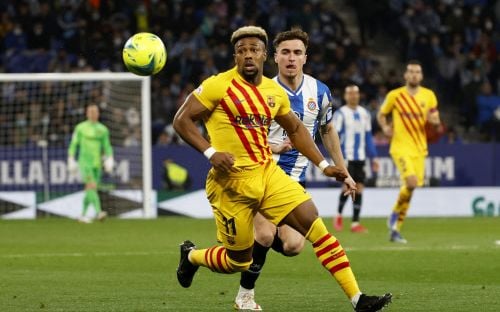 Madrid: Real Madrid's lead at the top of La Liga was cut to four points over Sevilla, as Carlo Ancelotti's side were held to a 0-0 draw away to Villarreal while second-placed Sevilla beat Elche in Spain's 24th round of games this weekend.

With Karim Benzema again out with a hamstring problem, Gareth Bale was a surprise starter for Madrid after 168 days on the sidelines, and the Welshman saw one effort well saved by home keeper Geronimo Rulli.

Armaut Danjuma hit the woodwork for Villarreal in the first half, while Luka Jovic hit the bar for Real Madrid in injury time after being set up by Eden Hazard, Xinhua reports. On Friday, second-half goals from Papu Gomez on 70 minutes and Rafa Mir five minutes later gave Sevilla a 2-0 win at home to Elche.

Real Betis remain third after an easy win against bottom side Levante, after goals from Nabil Fekir, Edgar and William Carvalho put them 3-0 up before half-time.

Dani Gomez netted in the 42nd and 46th minutes to give Levante hope, but Fekir's second in the 48th minute from a well-taken free kick made it 4-2, and Levante's afternoon got worse when striker Roberto Soldado was sent off for a bad challenge on Carvalho.

Luuk de Jong headed in an injury-time equaliser as Espanyol and Barcelona drew a typical derby 2-2.

The game was barely a minute old when Pedri put Barca ahead after a cross from Jordi Alba, but Espanyol were level before the break after Sergi Darder's exquisite curling shot into the corner.

Adama Traore was a constant threat on the right, and it looked as if he had helped Gavi put Barca back in front just after the hour, but the goal was ruled out for an offside from Frenkie de Jong.

Espanyol took the lead in the 64th minute when an error from Eric Garcia, who had replaced the injured Ronald Araujo at half-time, allowed Raul de Tomas to get in behind the defense, and the striker kept his calm before beating Marc-Andre Ter Stegen to the keeper's right.

Ousmane Dembele came on as a Barca substitute to end his first-team exile after turning down a new contract, but it was another substitute, Luuk de Jong, who equalized in the 96th minute with a powerful header after both Gerard Pique and Espanyol's Nico Melamed were sent off as the tension rose deep into injury time.

Atletico Madrid won a thrilling encounter 4-3 at home to Getafe in which Angel Correa and Mathias Cunha put Atletico 2-0 up, only for Getafe to turn the score around before half-time with a smart finish from Borja Mayoral and two penalties from Enes Unal.

Angel Correa levelled it at 3-3 before half-time and despite having Felipe sent off in the second half, Atletico won the game with a late goal from Mario Hermoso.

Real Sociedad put two 0-0 draws behind them with a 2-0 win at home to Granada thanks to Mikel Oyarzabal's 36th-minute penalty and a 73rd-minute goal from Rafinha.

Cadiz keeper Jeremias Ledesma saved a late penalty from Celta's Santi Mina to save his side a point in their battle to avoid relegation, while on Sunday Alaves ended an 11-game run without a win thanks to a 2-1 victory at home to Valencia.

Mamadou Loum put Alaves in front in the 16th minute and although Goncalo Guedes' controversial spot-kick got Valencia level in the 66th minute, Joselu won the game with another penalty after Edgar had been hacked down in the Valencia area.

Osasuna continued their positive win with a 3-0 win away to Rayo Vallecano thanks to first-half goals from Jon Moncayola and Ruben Garcia, with a 90th-minute strike to round off the scoring from Kike Garcia.