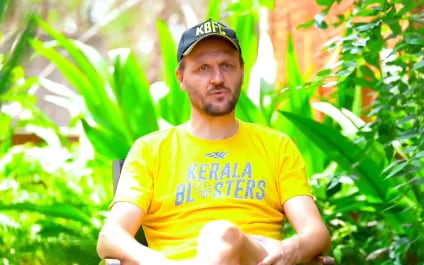 Goa: 'Guys, it has been a while since we played the finals. We are welcoming you to Goa. Come and support us. Keri vada makkale', said Kerala Blasters coach Ivan Vukomanovic on a video that has gone viral among the fans. He has been getting a huge response to the call and fans are saying 'we will make Goa a yellow sea'.

Blasters entered the final for the first time since 2016 by defeating Jamshedpur FC in the semi-finals. It will face Hyderabad FC on Sunday match to decide the winners of the ISL 2021-22.

Vukomanovic was delighted with his team's performance over the two legs and is looking forward to playing in front of the yellow army in the ISL final on Sunday.

"It's been a great achievement, I think for the club, first of all, and especially for the fans who were waiting for so long to be where we are standing today. After several years of disappointment and several seasons of less good results, I'd say, we achieved something great today. And I think that we should all be happy, all the yellow family, all the people from Kerala, we all should be happy," said Ivan Vukomanovic in a post-match press conference, as per the ISL website.

The head coach further said that playing in front of crowd gives his team 'extra power' and confidence.

"I think that the boys will have extra motivation seeing the crowd coming in. I think that the fans have suffered a lot throughout these two seasons, especially when there were no results. But I think even more this season where we had such nice results where the fans should actually have fun, and I think that the football we are playing is for the fans, because playing in front of these empty stadiums, it does not give you not a great feeling. The feeling when you play in front of full crowds, it gives you goosebumps, it gives you extra power, it gives you extra motivation to fight for your jersey to fight for your team," said the head coach.

Adrian Luna gave KBFC the lead in the 18th minute of the game, and though Pronay Halder got a goal back for the Men of Steel, it was not enough to overturn the aggregate scoreline and the Kochi-based side won the tie 2-1 on aggregate.