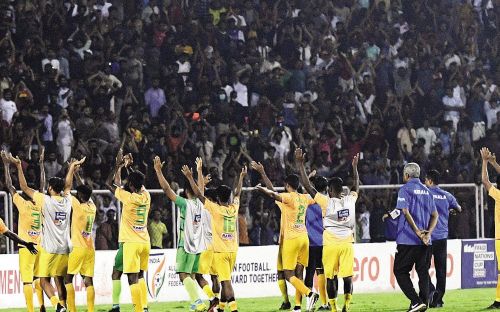 Malappuram: Kerala lifted its seventh Santhosh Trophy beating Bengal (5-4) in the shootout while more than 25,000 fans watched the triumph of the state at the Payyanad stadium here on Monday.

The match was a draw at full time (0-0) and at the extra time (1-1) leading to the penalty shootout. Sajan Pal of Bengal missed the target.

Dilip Orawn (97') scored the first goal of the match. His header on a beautiful cross of Supriya Pandit found its way into the net.

Muhammad Safdan returned the goal in the 116th minute of the nail-baiting extra time.

The last time the two teams played, the score was locked at 0-0 at the hour mark. Thereafter, Bengal goalie Priyant Singh faced a barrage of shots and was deceived in the 84th minute by Noufal while Jesin Thonikkara found the back of the net in the injury time.

However, Ranjan Bhattacharjee's men bounced back from the said loss by winning the remainder of the group stage games.

They qualified for the all-important final by recording a massive 3-0 win over a lacklustre Manipur side in the semifinal on Friday. Sujit Singh, Mohammed Fardin Ali Molla and Dilip Orawn were on the target as they downed Manipur with utmost ease.

Kerala collected 10 points from four games and are the only unbeaten side in the tournament.

Karnataka, meanwhile, finished second in Group B with seven points in their kitty. They won two games in the previous round against Gujarat and Services with their only defeat coming at the hands of Manipur. They were held for a 3-3 draw by Odisha in their first game.

Kerala last won Santosh Trophy after beating West Bengal in the finals in a penalty shootout (4–2).