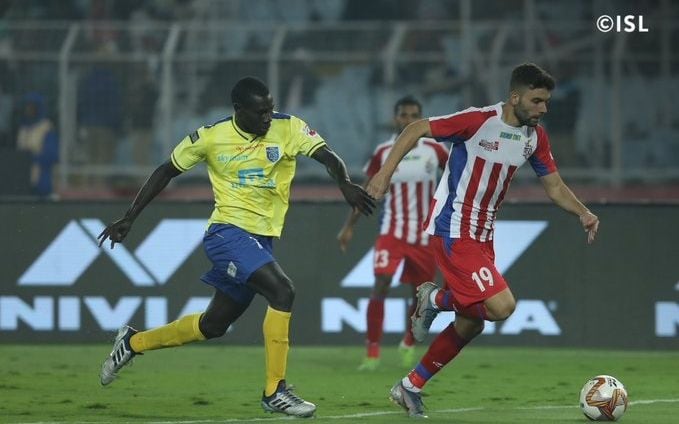 Kolkata: Kerala Blasters FC defeated ATK FC in the Indian Super League (ISL) at the Vivekananda Yuba Bharati Krirangan (Salt Lake Stadium) here on Sunday. A goal by Halicharan Narzary in the 70th minute gave the visitors their first away victory of the season.

High on confidence after their 5-1 win over Hyderabad, Kerala Blasters looked like a different team and dominated during the early and late stages of the match.

Eelco Schattorie deployed his men in yellow in a 4-4-2 formation and they pressed intensively from the first whistle.

In the 28th minute, Messi Bouli's shot was deflected just wide for a corner. The intensity of the match kicked up a notch as Mario Arques elbowed Prabir Das and got a yellow card in the 34th minute.

In the 35th minute, Roy Krishna almost put the home side ahead with a header but skipper Bartholomew Ogbeche was at the goal line to clear the ball away for a corner.

In the 42nd minute, Armando Sosa Pena took a free-kick from just outside the box but his attempt went just wide.

ATK actually had a penalty shout from a corner. A low ball was whipped in from corner with Javier Hernandez was trying to control it inside the Kerala penalty box. Messi Bouli put in a challenge and the ATK man went to the ground.

Though the referee didn’t give a free kick and Kerala carried on with a game. However, replays showed that there was contact from Messi Bouli on Javier Hernandez and he did not get the ball.

It was an exciting half of football with Kerala Blasters surprisingly dominating the ball but ATK creating the better chances.

ATK started the second half better pressing Kerala deep in their own half. Kerala could not reproduce the intensity from the beginning of the first half and were looking to counter.

In the 56th minute, Prabir Das showed good control to get away from his marker and put Roy Krishna through on goal. However, the ATK man’s second touch was too heavy. It helped Mohamad Rakip chased him down and put the ball away for a corner.

Another through ball found Roy Krishna though on goal ring on the stroke of the hour mark. Kerala keeper T.P. Rehenesh came charging down and cleared the ball away. ATK was piling on the pressure and Kerala were struggling.

In the 62nd minute, Jessel Carneiro’s cross from the left found Bartholomew Ogbeche. However, the Kerala captain’s header was wide of the target.

ATK was the first to make changes bringing on forwards Jayesh Rane and Jobby Justin for Agustin Iniguez and Balwant Singh respectively in the 65th minute. The home team is going for the kill.

The goal came against the run of play from Halicharan Narzary in the 70th minute. A goal kick was flicked forward by Messi Bouli and it fell to Ogbeche. ATK defense’s attempted clearance was not good enough.

Halicharan Narzary, who came charging down the middle took two touches and smashed it home with his weaker right foot from just outside the box. ATK keeper Arindam Bhattacharja should have done better but take nothing away from Halicharan. Kerala are in the lead.

T.P. Rehenesh made a crucial save off Roy Krishna in the 80th minute to preserve Kerala’s narrow lead. A cross from Jobby Justin found the ATK striker inside the penalty box with Vlatko Drobarov all over him. Roy found a bit of space and fired a fierce low shot on the turn with his right foot.

Rehenesh instinctively dived to his left and pushed the ball away. The ball was cleared away by the Kerala defense before any ATK player could get on the end of it.

In the 83rd minute, Eelco Schattorie brought in Prasanth Karuthadathkuni for Halicharan Narzary.

A minute later, Arindam Bhattacharja produced a brilliant save to deny Mouhamadou Gning’s header. A free kick by Mario Arques from the left evaded Messi Bouli in the box but Gning got his head on it. Arindam dived to his right and pushed the ball away.

At the end of normal time, Roy Krishna put the ball in the back of the net but was flagged offside along with five or six of his teammates.

ATK received a free-kick around the 35-yard mark. Javier Hernandez stepped up and lofted the ball over the Kerala Blasters defence. Roy Krishna got on the end of it and put the ball in the back of the net.

However, all of the Kerala Blasters players had stepped up at the same time to play the offside trap to perfection. The men in yellow reminded everyone of the great AC Milan side of Arrigo Sacchi and caught at least five ATK players offside.

There was action on the sideline as well with ATK coach Antonio Lopez Habas was sent off after heated arguments with Kerala Blasters coaching staff and match officials.

In added time, Roy Krishna went down inside the box with minimal contact from Mouhamadou Gning. ATK was claiming for a penalty but the referee pointed to a free kick against the striker.

In the end, Kerala Blasters held on for a gritty win while ATK need to get back to the drawing board.