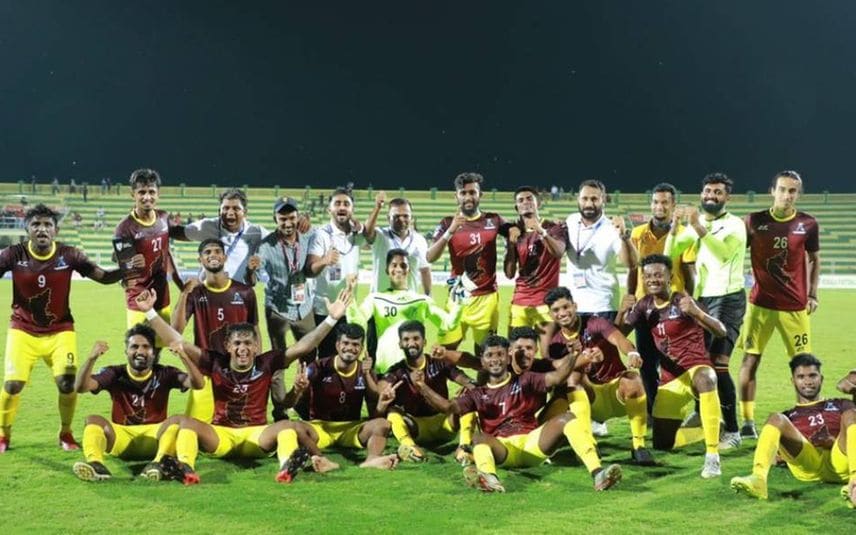 Malappuram: Karnataka notched up an emphatic 4-0 win over Gujarat to set up a semifinal clash against hosts Kerala in the 75th Santosh Trophy here on Monday.

On the final day's league matches, Odisha needed just a draw to confirm their semi-final berth but they were at their profligate best and lost out to former champions Services 0-2 in the afternoon match, to give Karnataka a breather.

The math, leading into this final group B stage game was simple: Karnataka needed to win by a minimum three-goal margin.

Karnataka took on the challenge and produced an extraordinary first-half with their forward Sudheer Kotikela (12', 29') and Kamalesh P (28') virtually sealing their chance inside the first half-an-hour.

Magesh Silva (60') then completed the rout to ensure their passage to the last-four where they will have a tough test against hosts Kerala on April 28.

Record 32 times champions Bengal will take on Manipur in the other semi-final on April 29.

For the first 30 minutes, Gujarat were barely allowed to breathe as Karnataka made a wave of attacks on their rival's goal.

They finally took the lead off a half cleared corner when Kotikela found himself with the ball at the edge of the box before curling the ball towards the top right corner.

Kamalesh collected a square pass from D Arun Kumar at the edge of the Gujarat area, switched feet, cutting past Harshil Parekh and Muhammed Sagar Ali to make a perfect finish.

Within a minute, they got their crucial third when Prashanth Kalinga ran into space on the right, and curled a superb cross in Karnataka's box.

Sandwiched by two defenders, Kotikela sent a first-time finish into the net.

Right on the hour mark, a cross from D Arun Kumar on the left, dropped the ball perfectly for Magesh Selva to complete the tally.

Earlier, Services rode on a second-half goal each from Vivek Kumar and Nikhil Sharma to end their Santosh Trophy campaign with a 2-0 win over 10-man Odisha.

Needing just a draw to become the second team from group B after Manipur to make the semi-finals, Odisha squandered chances aplenty, especially in the first-half.

Priya Darshan-coached Services broke the deadlock in the 74th minute with a header from captain Vivek. He rose the highest to nod the ball into the bottom corner. Odisha keeper Chinmaya Sekhar Behera got a hand to the ball but it was not enough to keep it out.

Eight minutes later, Odisha failed to clear their lines and substitute Sharma drove a first-time shot into the back of the net.

The signs of frustration was clearly evident and Odisha were reduced to 10 players in the 87th minute with Abhishek Rawat's late challenge on Deepak Singh. PTI