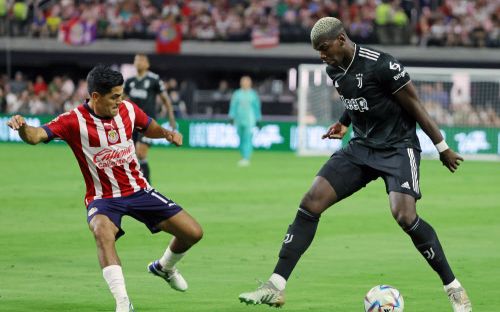 Las Vegas: Italian Serie A giants Juventus welcomed Paul Pogba back to the fold on Friday with a 2-0 friendly victory over Mexico's Chivas Guadalajara in Las Vegas to launch their US tour.

French World Cup winning midfielder Pogba joined Juventus this month on a free transfer after winding down his contract with Manchester United, who he joined in 216 for a then-record fee of 105 million euros.

The 29-year-old made his presence felt in coach Massimiliano Allegri's starting 11 at Allegiant Stadium, home of the NFL's Las Vegas Raiders.

But it was Marco Da Graca that fired Juventus ahead from close range in the 10th minute after Federico Gatti's header from a corner was parried by the Chivas goalkeeper.

Mattia Compagnon added a second goal in the 80th minute after Tommaso Barbieri's solo run into the area ended with his blocked shot veering straight to his teammate.

Pogba and Gatti were just two of the recent acquisitions that Allegri thrust into action, with former Real Madrid winger Angel Di Maria also in the lineup and Brazilian defender Gleison Bremer coming on amid a raft of changes for the second half.

Allegri is counting on them to fill the gaps left by the departures of veteran Giorgio Chiellini, recently signed with Major League Soccer's LAFC, leading scorer Paulo Dybala in a transfer to Roma and Dutch defender Matthijs de Ligt's move to Bayern Munich.

He knows fans are expecting Juventus to return to the pinnacle of Italian football, having failed to lift the trophy since winning nine titles in a row from 2011 until 2020.

Last season they finished fourth, and fell to Inter Milan in the Coppa Italia Final.

"Our duty is to win this year," Allegri said in Vegas. "After winning trophies 10 years in a row, last year was our first without, so we (are) obliged to win and we all know that it's an important year for us."

Juventus dominated the first half, with Di Maria, Pogba and Nicolo Fagioli all threatening.

Juventus keeper Wojciech Szczesny was forced into a save on the stroke of halftime by a shot from Carlos Cisneros.

After wholesale substitutions Juventus looked less cohesive in the second half, but they still managed not only to keep the Liga MX outfit in check but also to expand their lead in a promising start to a tour that includes a clash with Barcelona at the Cotton Bowl in Dallas and a meeting with Real Madrid at the Rose Bowl near Los Angeles. AFP