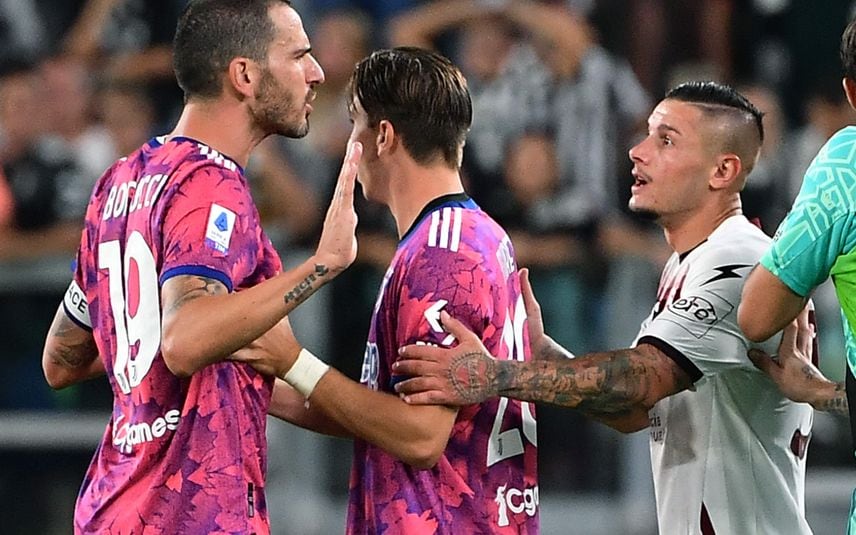 Turin: Juventus came back from two goals down at half-time to draw an incident-packed match with Salernitana 2-2 on Sunday as Atalanta gave up the Serie A lead after a 1-1 draw with Cremonese.

Massimiliano Allegri's Juve drew for the fourth time this season but the point shared doesn't tell the story of a match which ended with four red cards being shown after Arkadiusz Milik's last-gasp winner was ruled out following a VAR check.

The Poland striker sent the Allianz Stadium into raptures with a glancing header five minutes into stoppage time, but the goal was chalked off for Leonardo Bonucci being offside and interfering with play.

Bonucci had levelled on the rebound from his own missed penalty just two minutes previously to set up a grandstand finish which ended in farce.

Milik was given a second yellow card for removing his shirt after scoring what he thought was the decisive goal and then Juan Cuadrado, Salernitana defender Federico Fazio and Allegri were all sent off as tensions flared on the sidelines.

Allegri later asked to see footage which featured Antonio Candreva, who was near the corner flag and appeared to be playing everyone onside.

"We haven't seen that video, what if he keeps everyone onside? We don't have that video, nobody has it, so I don't know," he said on DAZN.

A match that ended in chaos began with Salernitana putting in a superb opening 45 minutes which had them two goals to the good through Candreva's tap-in and a Krzysztof Piatek penalty on the stroke of half-time.

Davide Nicola's side pulled off a survival miracle on the final day of last season and have got off to a promising start this term.

Salernitana are 10th on seven points, three behind unbeaten Juve who are struggling with injuries and form in the early part of the season.

Their first ever point at Juve was the fourth draw in six games so far in the new campaign.

- VAR drama -
That was not the only match in Italy to feature VAR controversy as Lecce president Saverio Sticchi Damiani blasted officials for missing two handballs in their 1-1 draw with Monza.

Monza earned their first point of their first ever Serie A season but Sticchi Damiani was incredulous after neither Pablo Mari nor Salvatore Molina touching the ball with their arms led to VAR reviews.

"I'm embarrassed, I don't know what to say to the fans or the players," he told DAZN.

"I just can't take them for a ride by telling them this is fine. We have been seriously damaged, we dominated the match and deserved to win but we were not allowed to."

Atalanta had been out on their own as leaders of Italy's top flight for the first time in over 60 years heading into the weekend's fixtures.

Atalanta, who opened the scoring through Merih Demiral four minutes before Valeri's strike, are level on 14 points with leaders Napoli and reigning champions AC Milan, both winners on Saturday.

Promoted Cremonese are in Serie A for the first time since 1996 and stay in the bottom three on two points from their opening six games.

Lazio are three points behind the leading trio after a 2-0 home win over Verona which came thanks to Ciro Immobile and Luis Alberto.

Bologna won their first match without Sinisa Mihajlovic as coach with Marko Arnautovic netting his sixth of the season in a 2-1 win over Fiorentina. AFP