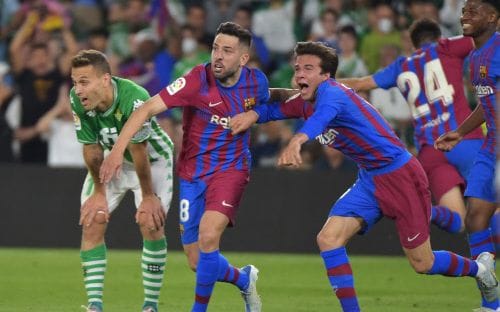 Madrid: Barcelona secured qualification for next season's Champions League on Saturday as Jordi Alba's 94th-minute winner against Real Betis guaranteed the Catalans' place in the top four of La Liga.

Alba's stinging injury-time volley snatched a 2-1 victory for Barca at the Benito Villamarin to ensure they will play in the Champions League next term, an achievement likely to be crucial to the club's hopes of financial recovery.

When Xavi Hernandez took over as coach in November, Barcelona lay ninth in La Liga, with genuine concerns about their chances of closing the gap.

But, Xavi's team surged up the table and can now look forward to rejoining their rivals Real Madrid in Europe's premier tournament next season.

"We have saved the situation," said Xavi. "This team believes until the end, it has a competitive edge that we didn't have in November."

The difference between Champions League and Europa League football could be worth more than 50 million euros ($52.7 million) to Barcelona, who began the season with debts of more than a billion euros, and were forced to let Lionel Messi leave for free last summer.

While a trophyless season can never count as a success for Barca, finishing in the top four is an impressive achievement for Xavi and a huge relief for the club.

"We are Barca, so this is the minimum requirement, but in November we were ninth," added Xavi. "We've had a very good second half of the season and now we look forward to next year, to improve enough to win titles."

Victory leaves Barcelona second in the table, 11 points clear of Betis in fifth. Both teams have three games left to play. Barca should now be confident of clinching second place too, with a five-point edge over Sevilla, who play at Villarreal on Sunday.

Betis looked like they had sealed a point after Marc Bartra headed in an equaliser in the 78th minute, three minutes after Ansu Fati had come off the bench to give Barcelona the lead. Alba, though, fired in at the back post to claim all three points for the visitors.

Fati's goal was his first in the league since November as the 19-year-old continues his latest recovery from another lengthy spell on the sidelines.

The teenager briefly returned in January from a hamstring injury that has kept him out for the best part of six months. That had followed his nightmare 11 months out with a knee problem between November 2020 and September last year.

"Ansu has this magic, an eye for goal, he is a difference-maker," said Xavi. "Where someone else needs three of four chances, he can score with half a chance."

Real Betis had to change their goalkeeper after 17 minutes as the injured Claudio Bravo was replaced by Rui Silva, who soon tipped Ronald Araujo's header onto the crossbar.

Barca also had the woodwork to thank for keeping the score level at half-time as Guido Rodriguez's strike from the edge of the area cannoned off the bottom of the post.

Betis finished the first half the stronger but the game opened up in the second, with Barcelona looking more dangerous.

It was Fati, off the bench, who made the breakthrough.

First, he tried to wriggle through a cluster of Betis defenders and when that failed, he tried a more direct route, the ball coming back to him from Alba and the finish finding a way through the bodies and dribbling into the corner.

Barcelona's advantage, though, lasted three minutes as a simple, crossed free-kick from Nabil Fekir was met by the shoulder of Bartra, who bundled in a swift equaliser against his former club.

Fati scuffed a chance at the other end before Alba struck in the 94th minute, drifting in at the back post and sizing up Dani Alves' floated ball, catching it sweetly, and sending the ball flying into the top of the net. AFP