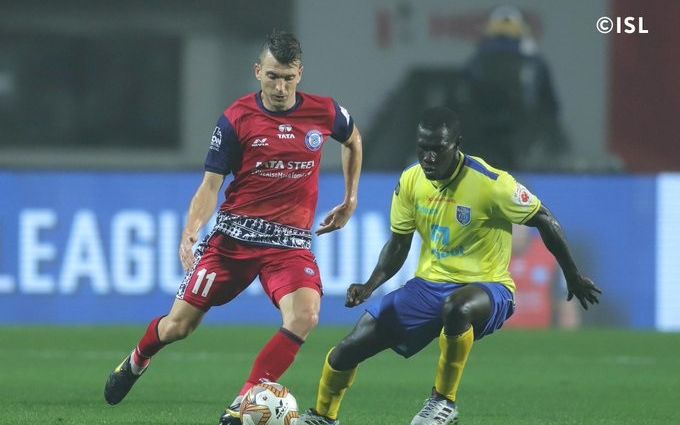 Jamshedpur: Kerala Blasters FC are all but out of the top four race in the Indian Super League (ISL) after suffering a 3-2 defeat at the hands of Jamshedpur FC at the JRD Tata Sports Complex here on Sunday.

Messi Bouli gave the visitors the lead in the 11th minute but Noe Acosta equalised in the 39th minute. Abdul Hakku was given a second yellow and subsequently sent off in the 50th minute. Sergio Castel equalised from the penalty spot in the 75th minute. An own goal from Bartholomew Ogbeche in the 87th minute settled the game.

While Eelco Schattorie continued with his recently favourite 4-4-2 formation, Antonio Iriondo moved away from this favoured 4-2-3-1 to copy his opposing tactician.

The visitors started on the front foot trying to press the hosts and the game practically got off with a yellow card to Joyner Lourenco for a lunge on Mouhamadou Moustapha Gning.

A mix up in the Jamshedpur defense resulted in the first goal in the 11th minute. Subrata Paul threw the ball out to Bikash jairu and the left back tried to pass the ball back to the keeper. However, the ball was under-hit. The keeper tried to clear it but fluffed his shot.

The ball fell kindly to Messi Bouli, who had pounced. The Kerala striker did not hit it cleanly but it was enough to get the ball in the net.

Messi Bouli missed a big chance to double the lead just four minutes later but he fired high and wide. Tiri got injured in the process and was replaced by Narender Gahlot.

Jamshedpur soon got a grip on the game and started creating chances. Abdul Hakku went into the book for a foul on Memo Moura in the 31st minute.

When Kerala looked to regain control of the game, Jamshedpur equalised through Noe Acosta in the 39th minute. Aitor Monroy put in an inviting cross from the left side. Mohamad Rakip was caught ball watching and Acosta slipped in behind to score with a first time finish.

Bartholomew Ogbeche was booked for dissent in the 45th minute and it was 1-1 at half time.

The second half started with Kerala trying to take the lead. However, their plans went out the window in the 50th minute. Abdul Hakku was given a second yellow for a tackle from behind and subsequently sent off.

The dismissal did not seem to affect Kerala Blasters as their captain Ogbeche scored just six minute later.

Jessel Carneiro was sent down the left but was turned away by Memo Moura. Jessel checked back and whipped in a cross with his weaker right foot into the Jamshedpur box. Ogbeche and Messi Bouli were waiting and the Kerala Blasters captain headed the ball into the net.

Sergio Castel replaced Sumeet Passi in the 66th minute as Jamshedpur tried to take advantage of their numerical superiority.

The Spaniard did not have to wait for long as Jamshedpur were awarded a penalty in the 75th minute. Messi Bouli handled the ball inside the penalty area while defending a corner. Eelco Schattorie was furious and was shown a yellow card for protesting but the decision stood.

Sergio Castel did not lose his cool and slotted the penalty into the bottom left corner. T. P. Rehenesh dove in the right direction and got his fingers to it but could not keep the ball out. It was 2-2.

Sergio Castel missed a free header in the 84th minute as Jamshedpur were looking for the killer blow. Aitor Monroy swung in a corner from the left side towards Sergio Castel at the back post. However, the striker headed the ball straight at T. P. Rehenesh.

Jamshedpur got their goal in the 87th minute. A deep high ball was whipped in and it found Memo Moura lurking near the Kerala six-yard box. He chipped in a ball for Sergio Castel from the right side but it missed everyone.

The ball ended up with David Grande on the left side and he fired a low shot into the middle where Sergio Castel was waiting. Ogbeche got ahead of the Jamshedpur man but his left footed clearance ended up in the net.

Ogbeche tried to redeem himself and hit the post a few minutes later after good work from Messi Bouli found his teammate in space just outside the penalty box. But it was not enough and the hosts saw the game out.

Jamshedpur FC have kept their top four hopes alive while Kerala Blasters FC are all but done for the season.

ISL: Mammootty, Lal extend greetings to Kerala Blasters ahead of much anticipated final