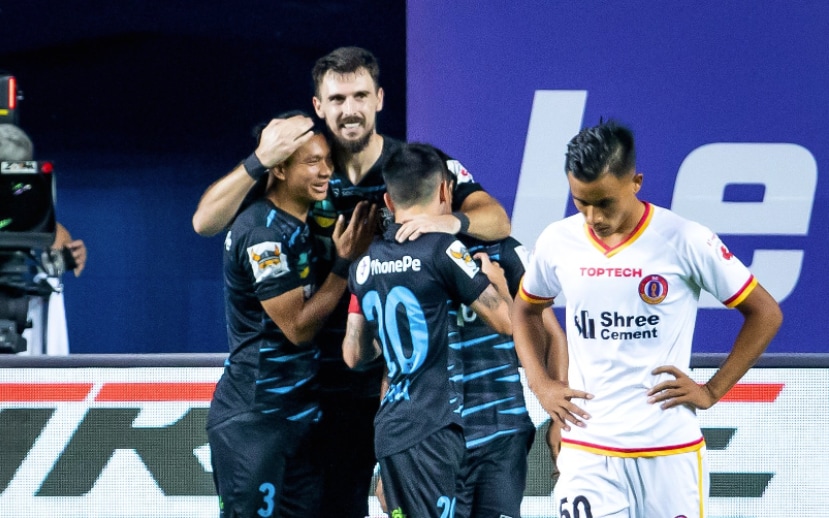 The Yellows reached the third position from sixth, thanks to the solitary goal by Enes Sipovic (49') who scored the winner for the Kochi side with a towering header. As for the Red and Gold Brigade, the winless run extends to five matches.

A measured approach from both teams saw less clear scoring chances in the early stages. Alvaro Vazquez was the first to hit the target for KBFC with a diving header which was easily saved by Sankar Roy between the sticks. The SCEB goalkeeper was quite busy in the remainder of the first half as well but commanded his area expertly to deny a goal to the Yellow Army.

There were no goals to report in the first half as neither team was able to break the deadlock before going into the break. The second half began on a sensational note for KBFC as they went into the lead courtesy of Enes Sipovic. Four minutes into the half, he connected well with a corner and guided the header past the goalkeeper to score his first goal in the ISL.

Ivan Vukomanovic's men continued to push for another goal after getting their noses in front. Jorge Diaz made room for himself on the 68th-minute mark but had his shot saved easily by Roy. Immediately on the other end, Antonio Perosevic unleashed a volley that almost caught Prabhsukhan Gill off-guard but did not lead to a goal. Mario Rivera made a whole host of changes post the second water break in order to inspire his team to find an equaliser.

Hira Mondal received a late yellow card but could have gotten a red due to the nature of his tackle on Adrian Luna. Six minutes were added by the fourth official for stoppages but KBFC maintained their lead and secured the win with a determined defensive performance.

Kerala Blasters FC faces a stern ATK Mohun Bagan test in their next outing at the Tilak Maidan Stadium on Saturday while SC East Bengal plays reigning ISL champions Mumbai City FC at the PJN Stadium on Tuesday after a week's gap. (ANI)