Dimitrios Diamantakos struck for the fourth time in as many games to give Kerala Blasters a narrow 1-0 victory over Jamshedpur FC and help them continue their winning run in the ongoing Indian Super League (ISL) 2022-23 season at the JRD Tata Sports Complex, here on Sunday. 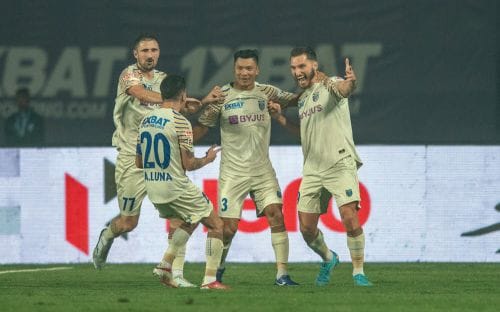 Jamshedpur: Dimitrios Diamantakos struck for the fourth time in as many games to give Kerala Blasters a narrow 1-0 victory over Jamshedpur FC and help them continue their winning run in the ongoing Indian Super League (ISL) 2022-23 season at the JRD Tata Sports Complex, here on Sunday.

The Red Miners will feel they could have been better as the Blasters nabbed four Hero ISL wins on the trot for the first time in their history.

The game got off to a cagey start, but the Blasters eventually took the lead in the 16th minute. From a free kick, Adrian Luna lobbed the ball toward Diamantakos at the far post. Poor defending from Jamshedpur FC allowed the unmarked Greek striker to get on the end of it and carefully side-footed the ball home from close range.

Luna was menacing in midfield, but Jamshedpur FC were the ones that came very close to levelling the game in the 37th minute. Striker Jay Thomas, who was deployed as a holding midfielder in this game, slid the ball into the box to Das before the midfielder saw his goal-bound shot pushed away by Prabhsukhan Gill at full stretch.

In the second half, quite a few opportunities presented themselves but the Red Miners failed to keep them on target. Out of nine goal attempts, Das' first-half shot was the only one Jamshedpur FC kept on target.

Substitute Ishan Pandita came on and scuffed his effort from range at the hour-mark before Daniel Chukwu's header'from Thomas' out-swinging corner was inches above the crossbar less than ten minutes later.

In the 72nd minute, Pandita was taken out by a smart tackle from Sandeep Singh right on the edge of the box. The full-back was only shown a yellow card before Thomas stood over the free-kick and fired it into the stands, summing up Jamshedpur's evening.

The win sees Kerala Blasters remain fifth on the table, but they are now three points clear of FC Goa and just one behind ATK Mohun Bagan. Next up for the Blasters is a clash with Bengaluru FC in Kochi on December 11.

On the other hand, Jamshedpur FC's run of losses continues as they stay tenth on the table. The Red Miners will visit the Salt Lake Stadium next to face ATK Mohun Bagan FC on December 8. ians