ISL final: ATK vs Chennaiyin is a battle of formations

While the Spaniard Habas fields ATK in a 3-5-2 formation, Englishman Coyle deploys Chennayin FC in a 4-2-3-1. The formations and the way two teams are usually set up will create some intriguing situations and match-ups between players across the pitch. 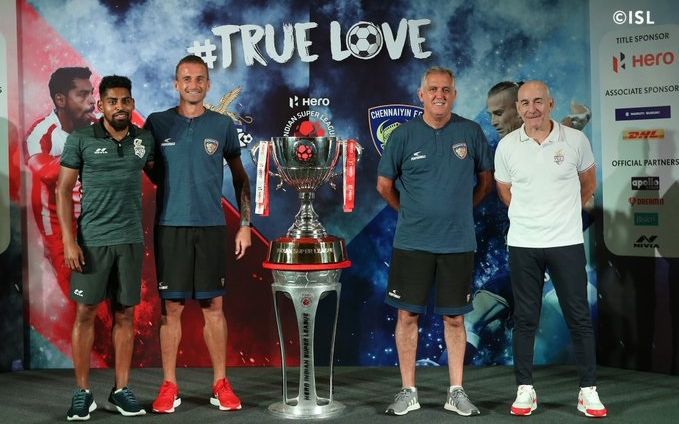 When former champions ATK FC and Chennaiyin FC take on each other at the Jawaharlal Nehru Stadium in Fatorda, Goa on Saturday, it will be a battle of two tacticians and their beloved formations.

Though the match will be held in an empty stadium due to COVID-19, both Antonio Lopez Habas and Owen Coyle will set their teams up, to win.

Both managers have been sticking with the same formation irrespective of results and injuries to players. While the Spaniard Habas fields ATK in a 3-5-2 formation, Englishman Coyle deploys Chennayin FC in a 4-2-3-1.

The formations and the way two teams are usually set up will create some intriguing situations and match-ups between players across the pitch. Let’s take a look at some of them.

ATK will look to keep their three-men defensive line high to aid their attacks and win the ball back quickly in case of a turn over. Chennaiyin likes to press high and their team is full of willing runners except their centre backs. ATK prefers to keep possession and tighten the screws while Chennaiyin likes to hit their opponents on the counter using their pace.

ATK’s most reliable source in attack, apart from their strikers, is their right full-back Prabir Das. A constant threat up and down the right flank, Prabir’s crosses have created five goals so far and will create problems for any defense. Jerry has been solid at left back for Chennaiyin and is never shy of joining the attack. In the final however, his primary task will be to keep Prabir quiet, which is easier said than done. He will need support from Lallianzuala Chhangte, who is always willing to track back.

The other side of the earlier contest is Chennaiyin’s livewire winger Lallianzuala Chhangte and ATK’s rock at the back Pritam Kotal. It will be the right centre back’s duty to keep Chhangte, who has 7 goals to his name, from threatening Arindam Bhattacharja or feeding Nerijus Valskis. It’s a contest between Chhangte’s pace and Pritam’s positioning. Despite his searing pace, Chhangte is not the best of passers and is yet to record an assist. Pritam needs to keep him away from the box.

ATK is one of the few ISL teams using a striker partnership. David Williams and Roy Krishna have 22 goals and 9 assists between them. That is an occupational hazard for Chennaiyin’s centre back pairing of Eli Sabia and Lucian Goian. ATK’s strikers are complete forwards and are capable of scoring from half chances. Their chemistry will test Sabia and Goian who will need support from their full backs and midfielders.

Chennayin’s trump card is their top scorer Nerijus Valskis who has 14 goals and 6 assists to his name. The Lithuanian is the focal point of Chennaiyin’s attacks. Predominantly considered a target man, Valskis can also move wide and bring others into action through his link-up play. Isolating him would blunt Chennaiyin’s attacks and John Johnson will have his work cut out.

Who will mark Rafael Crivellaro?

With 7 goals and 8 assists, the Brazilian is the creative hub of Chennaiyin. His close control, vision and passing takes Chennaiyin forward. Willing to drop deep or move wide to find space, Crivellaro will be difficult to mark. That will fall on Pronay Halder or Regin Michael. Denying Crivellaro space to operate will be key but ATK’s defensive midfielder will need help from his central midfield colleagues for sure.

It is said that in football, the games are won in the midfield. ATK vs Chennaiyin is a 3 vs 2. ATK’s trio taking on Chennaiyin’s double pivot. Habas usually deploys three central midfielders with either Pronay Halder or Regin Michael as the defensive flanked by the more creative Javier Hernandez and Edu Garcia. Armando Sosa is the other alternative if Habas decides to use Garcia as a substitute.

Coyle deploys a midfield double pivot of a defensively versatile Edwin Vanspaul and more creative Anirudh Thapa. Germanpreet Singh is the more defensive minded alternative while Thapa is irreplaceable. ATK will have the numbers advantage in midfield. Crivellaro may drop deep to create play.

Although it was Arindam’s mistake that gifted Bengaluru the only goal in the first leg of the semi-finals, the keeper made some brilliant saves to keep ATK’s lead intact. Neither Kaith nor Arindam are the most confidence inspiring keepers around and both are culpable of making a mistake. However, ATK has the better custodian and he has been decisive.

There could be a less obvious but equally decisive battle between Chennaiyin’s right back Laldinliana Renthlei and ATK’s left full back Michael Soosairaj. While Renthlei is unlikely to get much support from his winger Andre Schembri in defense, Soosairaj will have to help Sumit Rathi in defense.

Who is the better manager?

Both Antonio Lopez Habas and Owen Coyle are good tacticians and are passionate about the game. However, Coyle might have a slight edge here as he might be better at rallying his team to make a comeback like he did in the semi-final second leg against Goa.

All in all, the ISL final is likely to be decided by how Chennaiyin makes use of their wingers to exploit the space out wide and in behind the ATK defense. In turn ATK will look to dominate the midfield and trust their excellent striker partnership to do the damage.