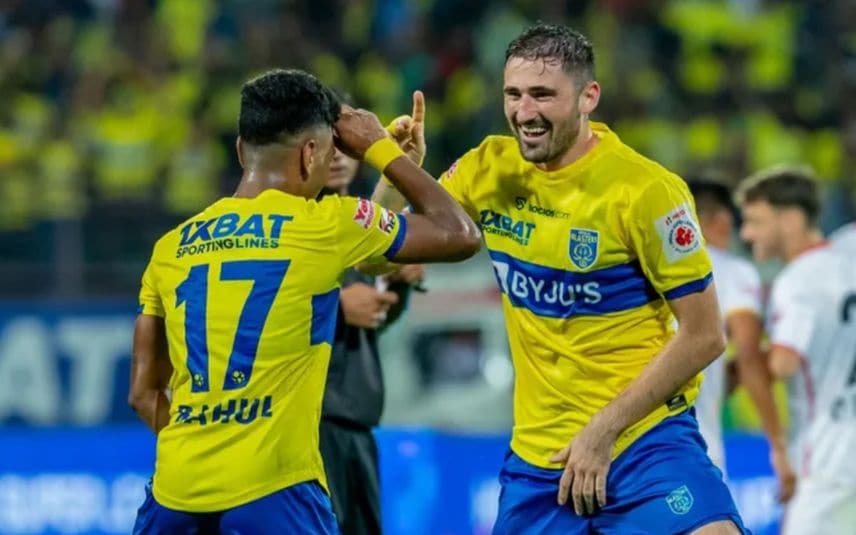 Kochi (Kerala):Kerala Blasters registered a 3-1 win over East Bengal FC in the opening match of the Indian Super League (ISL) 2022-23 season against East Bengal FC at the Jawaharlal Nehru Stadium, here on Friday.

Adrian Luna's opener and Ivan Kaliuzhnyi's brace in the second half were enough to secure a 3-1 win for the Blasters. On the other hand, Alex Lima was on the scoresheet for East Bengal FC.

Both teams had opportunities to break the deadlock in the first half. In the seventh minute, Alex Lima cut onto his left foot and attempted to place the ball into the bottom left corner. Prabhsukhan Singh Gill was at full stretch to palm the Braziaian's shot behind for a corner.

Three minutes later, at the other end, Apostolos Giannou found himself at the end of a sublime cross from Jessel Carneiro. However, the Australian could not keep his shot on target.

In the 42nd minute, Luna tested Kamaljit Singh with a freekick. The ball bounced awkwardly right in front of Kamaljit, who managed to parry it behind the goal and only conceded a corner.

The Blasters kicked it up a notch in the second half. Five minutes in, Giannou was denied after his deflected strike was brilliantly saved by Kamaljit. The East Bengal FC shot-stopper was at it again just three minutes later as he blocked Luna's close-range effort at his near post.

The deadlock was broken in the 72nd minute when Harmanjot Khabra found Luna in the box with an exquisite long ball from his own half. The Uruguayan managed to get his foot on it to sneak it past the goalkeeper, giving his side a crucial lead.

Eight minutes from full-time, The Blasters doubled their advantage. Ivan Kaliuzhnyi, who replaced Giannou in the 79th minute, went on to score his debut goal right after coming on. The Ukrainian made a run at the East Bengal FC defence from his own half before calmly slotting the ball into the net.

Before that goal, East Bengal FC had gotten on the scoresheet in the 88th minute, courtesy of a stunning volley from Alex Lima who was left unmarked inside the box. But a minute later, Kaliuzhnyi doubled his tally and reinstated the Blasters' two-goal advantage with a brilliant left-footed volley from 25 yards out.

The Blasters will host another team from Kolkata in their next fixture when they face ATK Mohun Bagan on October 16. The Red and Gold Brigade will head back home for their next game against FC Goa at the Salt Lake Stadium on October 12. IANS