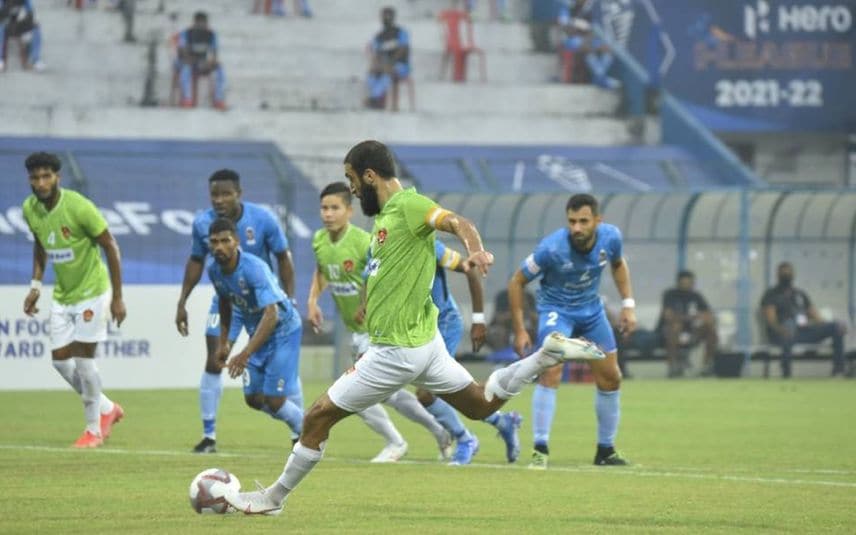 Gokulam Kerala skipper Sharif Mohammad scored the solitary goal of the match from the penalty spot early in the first half.

Both teams made a nervy start to the game as they cancelled each other out in the opening exchanges of the game. As each team began to grow into the contest, their intentions were laid bare as both Gokulam Kerala and Churchill Brothers looked for a direct attacking threat by way of long balls behind the opponent's last line of defence.

The Malabarians found the first breakthrough of the match after being awarded a penalty in the 16th minute. As the pacy Ngangom Ronald Singh skilfully surged with the ball into the Churchill Brothers box, he was impeded and brought down by a mistimed challenge from the Lebanese Shadi Skaf.

Gokulam Kerala skipper Sharif Mohammad stepped up to take the resultant spot-kick and calmly slotted the ball into the bottom left corner to give his side the advantage.

Churchill Brothers' first big chance of the game fell the way of Bryce Miranda in the 21st minute, thanks to a sublime piece of control and deftly played through ball by Brazilian Guilherme Dos Santos which sent Miranda bearing down on goal.

Miranda produced a fierce volley one on one with the keeper, but his effort was matched with a fantastic save from Gokulam goalkeeper Rakshit Dagar.

As Gokulam played to their slender one-goal lead and began dominating proceedings with a high amount of possession, the Red Machines looked to end the first half strongly and created back to back chances in the 38th minute.

First, midfielder Kingslee Fernandes tested Rakshit Dagar with a snapshot from inside the box, which was saved by Dagar without a fuss. A minute later, Nigerian Kenneth Ngwoke drew a fantastic reaction save from Dagar as his shot from outside the box took a deflection.

Gokulam Kerala nearly doubled their lead in added time in the first half. Midfielder Thahir Zaman produced a fantastic snapshot from an angle which beat Churchill Brothers goalkeeper Shilton Paul, but he was denied by the woodwork.

Churchill Brothers restarted the match in the second half aiming to up the ante in the encounter. The Red Machines increased the tempo of their play and started to combine well together as a team, but could not create any clear cut scoring chances to put the Gokulam Kerala goal under threat.

As Churchill Brothers hunted an equaliser, the best chance of the second half again fell to the Malabarians in the 68th minute. Ngangom Ronald Singh; who was a constant menace for the Churchill defence from the right flank, again got the better of his defender and measured an inch-perfect cross from the right flank which was met in the box by Thahir Zaman.

Zaman could not get clean contact on his header and ended up heading the ball into the ground, which made Shilton Paul's save a little bit easier. From the subsequent corner from the right flank, Cameroonian Aminou Bouba latched on to a free header, but could not keep his effort on target and missed narrowly as his header arrowed over the bar.

In a game of few chances in the second half, Gokulam Kerala continued to defend well and maintained their one-goal advantage, keeping a clean sheet in the process and opening their I-League 2021/22 campaign with a precious three points.

Gokulam Kerala will come up against Neroca FC in their next match on December 30, while Churchill Brothers will look to get their campaign on track against Roundglass Punjab FC on December 31.