Plan for I-League champion side playing in ISL from 2023 remains intact: AIFF 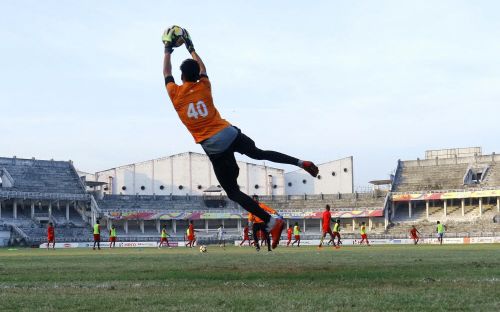 Das said there is no deviation from the road map on Indian football's domestic structure drawn by the AIFF in 2019 after consultation with the Asian Football Confederation (AFC).

While granting ISL the top-tier status, the AIFF had said the I-League champions (of 2022-23 season) will play in the ISL 2023-24 season on "sporting" merit.

Two years after this, there will be promotion (from I-League to ISL) and relegation (from ISL and I-League) between the two leagues.

"There is a road map which kicks in from the season 2023-24 whereby the winner of the I-League (from 2022-23 season) on sporting merit will play in the ISL. There will be an increase in the number of teams in the ISL," Das said during a virtual press conference.

"This will continue for two years and after that there will be clear process of relegation (from ISL to I-League) and promotion (from I-League to ISL). That has been the plan which has been agreed by all the stakeholders -- the ISL and I-League clubs, the AFC and the AIFF."

The I-League champions of 2022-23 playing in the ISL the following season is, however, subject to the club fulfilling the licensing criteria.

Das admitted that there are problems faced by the clubs, especially due to the COVID-19 pandemic situation, but all the stakeholders want to follow the road map.

"COVID-19 has been a big setback. There are problems, we realise that. A team like former champions Chennai City is not able to continue to play in I-League. We also know that there are some issues with the SC East Bengal playing in ISL.

"But at this point in time, the road map we have agreed with all the stakeholders remains. We are completely in sync with that plan. There is no reason to deviate from the plan," Das said at the interaction ahead of the I-League, beginning on December 26.

This year's I-League season will kick off in Kolkata with a match between TRAU FC of Manipur and AIFF's developmental side Indian Arrows.

Just like last year, the I-League will be held in a bio-secure environment with strict COVID-19 protocols. The matches will be played across three venues -- Mohun Bagan Ground in Kolkata, Kalyani Stadium and Naihati Stadium.

With three new entrants -- Sreenidi Deccan FC of Andhra Pradesh, Rajasthan United FC and Kenkre FC of Kolhapur -- this season, the number of teams has increased to 13.

All the players, along with the referees, officials and volunteers, will be housed inside bio-secured bubbles in four different hotels across Kolkata.

Leagues CEO Sunando Dhar said the AIFF will be implementing the same protocols as last season.

"Since there are more teams this time we have booked more hotels as bio-bubbles. We are following the same protocols of last time," Dhar said.

"It is not easy for the players and officials to remain locked up for three and half months in a hotel. Hopefully, we get the same kind of support from the teams like last year."

Asked how many foreign players will be allowed in each team, he said, "We are allowing each team to register six foreign players but, on the match day, the 3+1 rule (three players of any nationality and one from an AFC member association) will apply."

He said 1Sports will telecast live all the 140-plus matches and the channel will also live-stream the games.

Once the divisions are made after the end of Phase I, the teams of each group will play against each another in a single leg round-robin format. While the teams in Group A will play to determine the champions, those in Group B will be in a relegation battle.

Das said if the COVID-19 situation permits, the I-League Qualifiers will not be held next year and the second Division League will be played on a home and away basis from 2022-23 onwards. PTI

Kolkata: On an all-time league record of 20 matches unbeaten in a row, Gokulam Kerala FC are now just four points away from defending the title they won ..

Rome: Tammy Abraham fired Roma into the inaugural final of the Europa Conference League on Thursday with the only goal in a 1-0 win over Leicester City ..

Madrid: Karim Benzema scored an extra-time penalty as Real Madrid pulled off another astonishing comeback in the Champions League to stun Manchester City ..