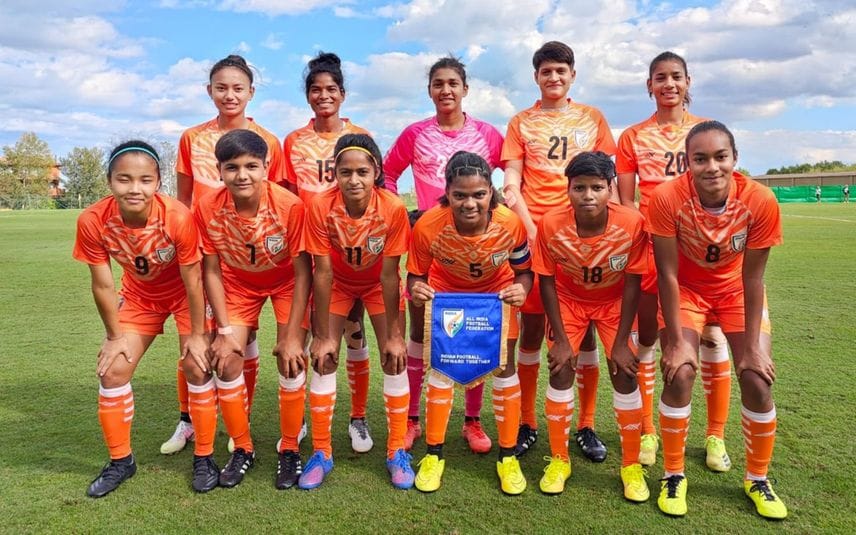 New Delhi: The Indian U-17 Women's team succumbed to a 1-3 defeat to Sweden at Torremirona Relais in Spain, their first match of the exposure tour for the girls ahead of FIFA U-17 Women's World Cup event back at home.

India, however, looked promising at the start as they competed on equal terms in an intense midfield battle that saw winger Anita Kumari get an early shot at the rival goal, which was saved.

Minutes later, Nitu Linda tried her luck to take a shot from the edge of the Swedish penalty area, but was blocked.

India earned a free kick in the 19th minute and Anita once again made an attempt at the rival goal, this time a header, but the Swedish custodian Elin Ekmark saved it with ease. A few minutes later Sweden striker Maja Jarvensivu tried a long ranger, which went over the bar.

Both Anita and India goalkeeper Anjali enjoyed a good first half. The former made a few inroads around the half-hour mark, while the latter made a few worthy saves to keep her side in the game.

Despite the chances created by Thomas Dennerby's girls, it was Sweden, who got the breakthrough close to halftime when a Sara Frigren's pass from the corner kick was met by Ida Gramfors and she bulged the back of the net.

Changing over, Swedish girls dominated possession and created chances in front of the Indian goal. In the 47th minute, Sweden doubled their lead scoring one from Frigren's rebound shot. Minutes later, Selma Astrom scored the third for the night making most of a Frigren cross.

India head coach Dennerby made three changes, bringing on Sudha, Shubhangi and Shilky in place of Lynda Kom, Babina Devi and Varshika as India pressed hard to find the target.

In the 62nd minute, Sudha made her immediate impact - she dribbled past her marker off a Astam long pass and chipped it in to pull one back for India.

Nitu Linda almost created a chance out of nowhere, as she closed down on a rival defender to snatch the ball off her feet inside the Sweden penalty area. However, the Sweden goalkeeper was close at hand, managing to gather the ball.

With less than 20 minutes of regulation time left on the clock, Dennerby made more changes, bringing in Naketa, Lavanya and Shailja in place of Kajal, Neha and Kajol Dsouza. India continued to drive forward but could not score again leaving Sweden to win the match with a 3-1 margin.

FIFA U-17 Women's World Cup 2022 is scheduled to be held in India between October 11 and 30. The seventh edition of the biennial youth tournament will be the first-ever FIFA women's competition to be hosted by India. (ANI)