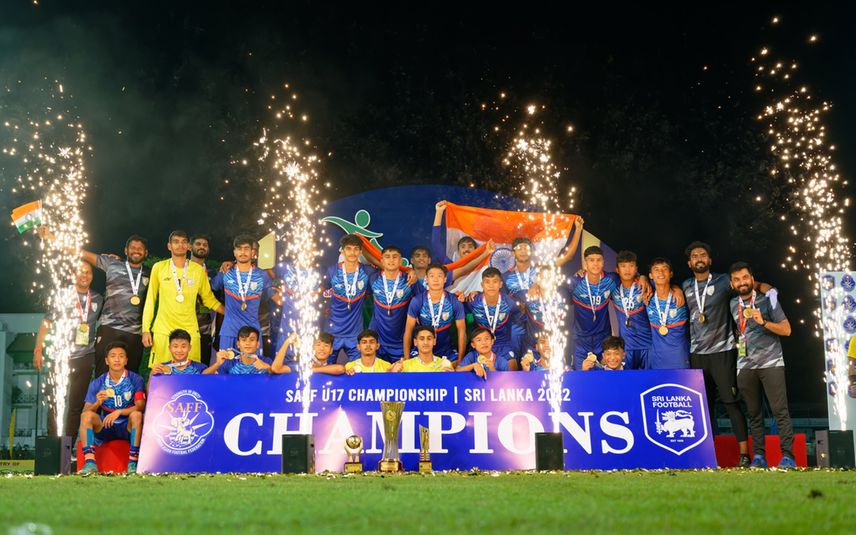 Colombo: Indian boys' football team clinched the SAFF U-17 Championship title after defeating a 10-man Nepal 4-0 in the final at the Racecourse International Stadium, here on Wednesday.

Boby Singh, Korou Singh, captain Vanlalpeka Guite, and Aman scored a goal each, to shape a resounding victory in India's favour. With this win, India retained the title, which was previously labelled as the SAFF U-15 Championship.

In the group league, Nepal defeated India 3-1. However, in the final, India looked a side eager to take complete charge of the proceedings right from the word go.

They got off the blocks early in the match, looking to find the gaps in the Nepal defence, and managed to get the lead in the 18th minute through Boby, who headed it into the goal at the far post, after a good piece of play between Ricky Meetei and Vanlalpeka Guite, as the latter sailed a cross towards the eventual goalscorer.

Guite was in the thick of things again 12 minutes later, getting another assist to his name, as he played a through ball to Korou Singh, who just had to round the keeper and slot it home.

The second goal meant that Nepal began attacking the Indian half with a lot more urgency, but the Indian midfield was managing to frustrate their efforts.

The frustration came to the surface on the 39th minute, when Nepal captain Prashant Laksam elbowed Danny Laishram on the back after the two tangled up in a challenge - an action that was straightaway awarded with a red card by the referee.

With the man advantage, India saw out the rest of the first half, before resuming the proceedings after the change of ends. Soon enough, Guite, who had earlier provided two assists, netted a goal of his own in the 63rd minute, when his cross from the left swerved into the top corner, handing India a three-goal lead.

Nepal's second half substitute Dhan Singh did create a couple of chances for his side in the closing minutes, but the one man advantage meant that India were able to thwart the efforts.

At the other end, India's second half substitute Aman added salt to the wounds in injury time, netting the fourth goal, after he was set through behind the Nepal defence. The result was beyond doubt by the end, as India successfully defended their title.

India captain Vanlalpeka Guite was named the Most Valuable Player of the Tournament, while goalkeeper Sahil won the Best Goalkeeper awards.

"I am extremely proud of my boys. There has been a lot of hard work put in, and every support staff, and player deserves equal credit," said head coach Bibiano Fernandes.

"The efforts put in by AIFF at the youth level by providing us continuous exposure tours with help from SAI has helped the boys mature," he added. IANS

Maradona's 'Hand of God' ball to go up for auction