A ten-man India U20 booked their slot in the final of the SAFF U20 Championship after defeating Maldives in their last league match played at the Kalinga Stadium here on Tuesday. 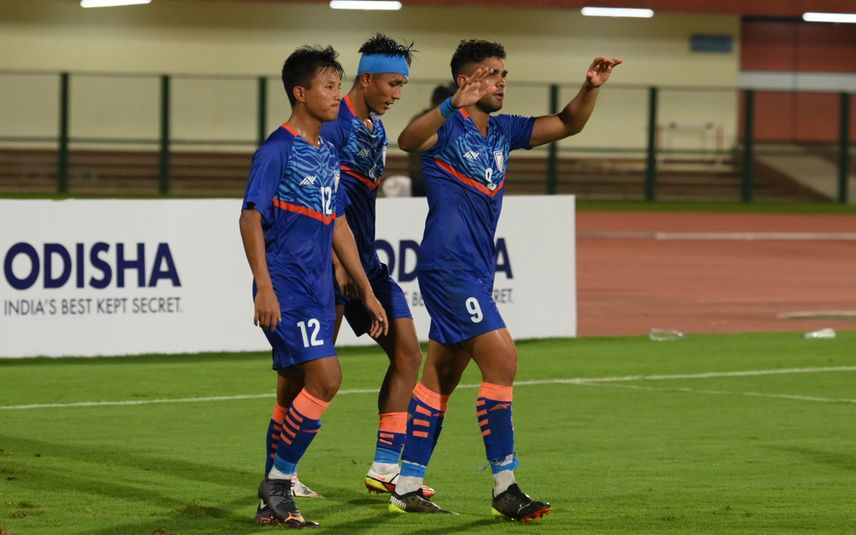 Bhubaneswar: A ten-man India U20 booked their slot in the final of the SAFF U20 Championship after defeating Maldives in their last league match played at the Kalinga Stadium here on Tuesday.

India, who finished on 9 points will take on Bangladesh U20 in the final which is slated on August 5. In a previous match, Bangladesh U20 played a 1-1 draw with Nepal U20.

Substitute Gurkirat Singh made the difference between the two teams, banging it into the net in the 89th minute. Parthib Gogoi's grounder found a deflection, and Gurkirat's rasper bulged the net from inside the box.

For all their domination and penetration which saw chances fall their way in both halves, the Indian colts who had scored 8 in their last encounter against Nepal U20, stayed guilty of not being able to capitalise on the chances they created. They even hit the crosspiece in the 67th minute.

The Indian colts, however, suffered a jolt when forward Parthib Gogoi, the highest goal scorer in the tournament so far was given marching orders in the 90th minute.

India's first real chance came in the 15th minute. Maheson got past one, ran into the vacant area and played it between the defenders for Himanshu Jangra to create panic in the rival defence. First, Himanshu's effort was blocked, and off the resultant clearance Parthib Gogoi's shot was blocked too. And even as it again fell to Himanshu, he couldn't slot it into the net from the melee.

In the 26th minute, Himanshu laid it off for Parthib who sped down the right, entered the box, and off the resultant clearance it fell to Himanshu whose stabbing shot was palmed away by the rival goalkeeper Yoosuf Abdullah.

Till then with Maldives being content to defend in numbers, Head Coach Shanmugam Venkatesh, in an effort to increase numbers inside the rival box, went for a double substitution in the 31st minute itself - striker Gurkirat Singh coming in for an injured Raj Basfore, and Vinay Harji replaced Vibin Mohanan.

Gurkirat was in the thick of things some six minutes later, but Yoosuf stooped down low to collect the free-kick.

In the 42nd minute, Himanshu entered the box, dodged past his marker but his left-footer was saved by Yousuf for a corner. The very next minute Himanshu muffed the easiest chance of the first-half. All in the clear, a loose ball fell to him all. But he went for power and missed the target.

An unchallenged Maheson Singh had another opportunity in added time when he latched on an Amandeep cross but failed to place it into the net as both teams headed to the interval locked goalless.

Changing over, India immediately made an inroad but Himanshu's shot sailed over. The Indians by then were attacking in numbers, but the wait for the goal continued.

Shubho Paul came in as a substitute in the 67th minute replacing Sibajit Leimapokpam.

In the 82nd minute, India earned another corner after Parthib's cross fell to Brijesh Giri outside the box. But even as he attempted to step away from his marker, the rival defence recovered in time to deny him.

In the 86th minute, Bikash Yumnam, all in the clear and in the 6-yard box, leapt high to connect Gurkirat's cross but was unable to slot home. Two back-to-back corners fell Indian's way in the 87th minute, but even as Himanshu leapt higher than all in his effort to put it in, he missed by a whisker.

Gurkirat scored the winner in the 89th minute, but India had chances even after that with Amandeep, perhaps, missing the easiest chance of the second-half. Despite having Yoosuf at all his mercy, he failed to tap it in.

Earlier, Maldives' sole effort at the Indian goal had come in the very first minute but Indian goalkeeper Som Kumar dived to his right -- fully stretched to keep off a Zain Zafar free-kick.