How will Arsenal line up this season?

With the new English Premier League season kicking off on Saturday (September 12), Mathrubhumi.com takes a look at how Arsenal would line up. What changes have been made and where they need to improve. 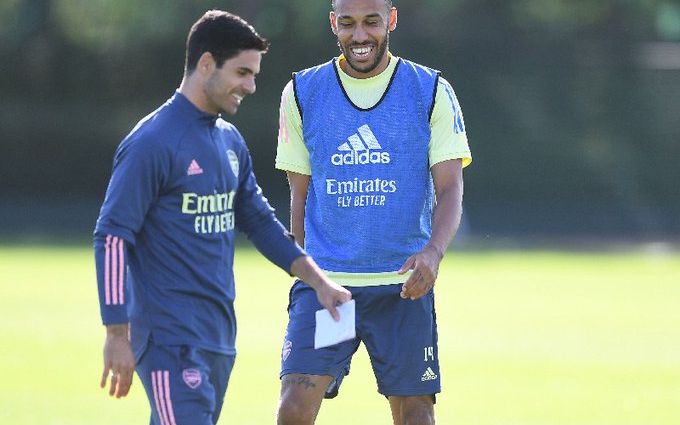 Aubameyang and Arteta during a training session | Photo: Twitter@Arsenal

Arsenal looks like a very different team ever since Mikel Arteta took charge. Despite a very bad season, the Gunners managed to win the FA Cup against London rivals Chelsea. They also defeated reigning champions Liverpool to lift the Community Shield.

Arteta has fielded Arsenal in a 3-4-3 (or a 5-2-3 as the wing backs provide the width) formation and he is likely to stick to it. Arsenal has done some smart transfer business too. Bringing in winger Willian and centre backs Gabriel Magalhaes and William Saliba.

They may not have enough to fight for the title but the Gunners will put up a decent fight for the Champions League spot. They can even make serious progress in the Europa League as well.

Leno will likely be the first choice goalkeeper as Aston Villa is keen to sign Emiliano Martinez. It could be good business for Arsenal but a decent replacement will have to be found if Martinez decides to leave.

In the defence, Saliba will slot in on the right side of the back three. David Luiz will be in the middle and Gabriel will be on the left.

This could leave Arsenal vulnerable on the right side as both Saliba and Luiz are not very good in the air. Both Saliba and Gabriel will need a bit of time to adjust to the Premier League. But neither of these problems are unlikely to hold Arteta back.

William Saliba is still a teenager but is a much better defender than Shkodran Mustafi, Sokratis Papastopulous and Rob Holding. Pablo Mari is another defender Arteta needs to decide on while Calum Chambers is recovering from an ACL injury.

One or two of the above mentioned centre backs could leave the Gunners in this transfer window.

Bellerin and Tierney will act as the wing backs on the right and left respectively with Cedric Soares and Sead Kolašinac providing ample competition. Ainsley Maitland-Niles and Bukayo Saka have proved that they are versatile enough to be wingers or wing backs.

In the midfield, Granit Xhaka and Real Madrid loanee Dani Ceballos will be the first choice double pivot. They were particularly good last season.

Lucas Torreira was brought in to be the defensive midfielder guarding the backline. However, he has struggled for minutes as Arteta has shown faith in his more creative midfielders. With Mohamed Elneny and Matteo Guendouzi ahead of him, Torreira will struggle to even find himself on the bench, let alone on the pitch.

Matteo Gandoozi’s off the field antics and his lack of professionalism is likely keeping him out of the first team. He has the talent but his attitude is questionable to say the least.

Youngsters Joe Willock and Emile Smith Rowe will get more minutes if either or both of Torreira and Gandoozi were to leave. The duo are rumoured to be on the radars of several European clubs.

It is unclear if Mesut Ozil is part of Arteta’s plans. If not, he needs to be moved on. Finding a suitor could prove very difficult but it’s not impossible.

In the attack, Willian will be the favourite on the right. Despite 32 years of age, his work ethic, industry and defensive contributions is second to none. He has a fantastic right foot to take free kicks as well.

Pierre-Emerick Aubameyang will be on the left while Alexandre Lacazette will lead the line.

Nicolas Pepe has failed to live up to the expectations and will have to be content with cameos from the bench unless he shows consistency. Youngsters Reiss Nelson, Eddie Nketiah and Gabriel Martinelli will fight for minutes on the pitch.

Arsenal will be content with Europa League next season even if Arteta is not. Considering the gap they need to close down and the signings other teams have made, the Gunners are unlikely to do more than fight to be the best of the rest.

Arteta will have time on his side but he will be looking to add another trophy to his managerial resume. But that will not be the Premier League. A good show in the Europa League will definitely benefit the gunners.