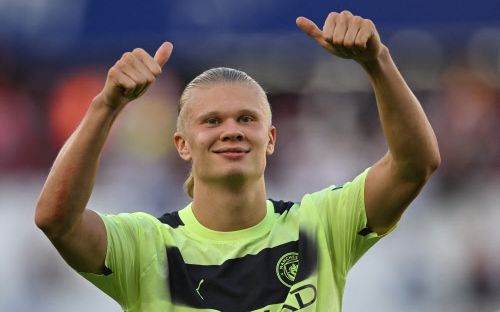 London: Erling Haaland said he is only getting started after scoring twice on his Premier League debut as Manchester City won 2-0 at West Ham on Sunday.

The Norwegian won and then coolly slotted home a penalty to open the scoring before latching onto Kevin De Bruyne's through ball to become the first City player to score twice on his league debut since Sergio Aguero.

"It's about the connections we do every day in training. This will come even more so I'm not worried," said Haaland. "It could have been more."

Haaland is seen as the successor to Aguero, who is the club's all-time leading goalscorer.

Pep Guardiola's men won the Premier League for the past two seasons largely playing without a central striker and the City boss was delighted with how quickly the move for Haaland paid off.

"Erling is a good finisher and he is adapting perfectly," said Guardiola.

"He was good. I can't teach him to score goals and he just needs to be comfortable." AFP