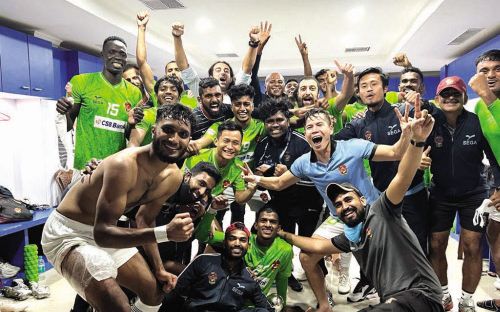 Naihati (WB): History beckons Gokulam Kerala when they face Sreenidi Deccan in the penultimate round of the I-League here on Tuesday, as even a draw will hand them the crown and make them the first club to defend the title in the 15-year-old league.

Gokulam are currently on 40 points, six ahead of second-placed Mohammedan Sporting (34 points), and they can win a second successive title on Tuesday even with a defeat if the Kolkata team does not win against Rajasthan United in the second match of the day at Kalyani.

No club in the I-League era has defended its title. Kolkata side East Bengal had achieved the feat in the era of National Football League, the predecessor of I-League, by winning title in 2002–03 and 2003–04 seasons.

Gokulam Kerala emerged 2-1 winners the last time these two teams met. Coach Vincenzo Alberto Annese is aware of the magnitude of the game but maintained that preparations would not be that different.

“We know the importance of the game but the preparation is the same. We need to play and we need to score. I want my players to come up with extra power for this game and that is what will help us to try and get the three points,” he said.

“Having played them earlier in the season, we feel we know them better. They have two top forwards in Louis Ogana and David Castaneda. We know they are strong in the central areas and we will have to be at our best to get the three points,” said Annese.

Sreenidi Deccan -- currently fifth with 26 points -- notched an impressive 2-0 win over Punjab FC and head coach Fernando Santiago Varela is hoping his side can carry that momentum into the game against Gokulam Kerala.

“From the last time we played them, I believe we are a better team now, in both the offensive and defensive phase. This is our first season together so I am happy with what we have achieved together,” he said.

Varela is focused on the battle for third place in the table where only one point separates his team from Churchill Brothers and Punjab FC.

“We will try to fight to define our position and not how it impacts the other teams in the table, try to get third place which I believe is the least we deserve,” said Varela.

In the second match of the day to be played at Kalyani, Mohammedan Sporting face Rajasthan United, who are currently placed at sixth with 22 points.

“We have been playing good football. We managed to win the Calcutta Football League after so many years and reached the final of the Durand Cup. For me, this is one of the best seasons for this football club," Mohammedan head coach Andrey Chernyshov said.

Rajasthan United head coach Francesc Bonet said his players are prepared to play against one of the top teams in the I-League.

“We will be playing our last game against Mohammedan SC in Kolkata in front of the fans. So, the motivation is always there. We know this match can also determine the champions but we are focusing on ourselves,” he said.

FSDL in talks with Kerala, Goa to explore idea of hosting ISL