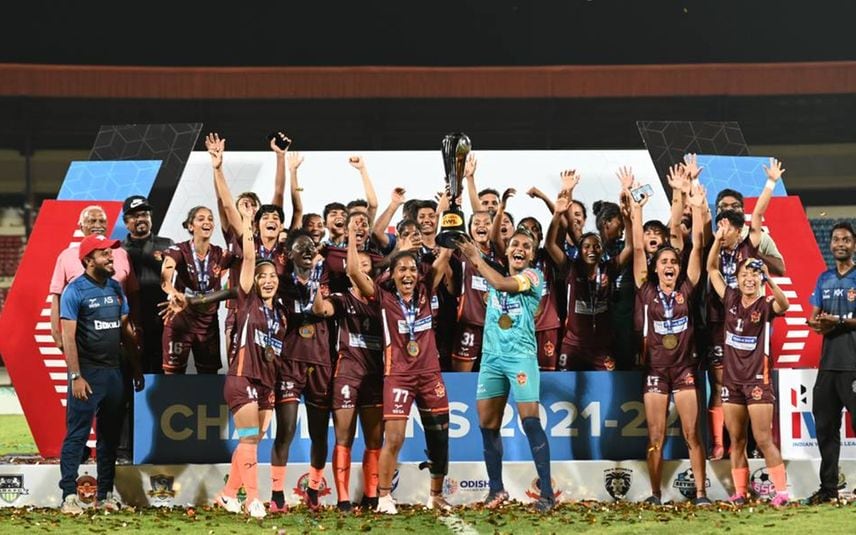 Bhubaneswar (Odisha): Gokulam Kerala FC registered a resounding 3-1 comeback win over Sethu FC on the final day of the Indian Women's League 2022 season to clinch the trophy for a second successive time on Wednesday.

The two sides came into the game with 10 consecutive wins each and required a win to seal the title. The game at Kalinga Stadium itself was full of quality, with Sethu and Gokulam Kerala both producing brilliant passages of play.

The team from Tamil Nadu took the lead in just the third minute of the game after Anju Tamang's powerful strike deflected off a defender and onto the head of Renu Rani. The forward made no mistake in slotting the ball home from close range.

However, Gokulam Kerala bounced back with full force and equalised in the 14th minute. Loitongbam Ashalata Devi scored from the spot with a cool-headed finish after Elshaddai Acheampong drew a foul inside the box.

The Ghanaian forward went on to make it 2-1 for the defending champions in the 33rd minute. She capitalised on an error in the Sethu defence and tapped the ball in from close range to complete the comeback. In-form striker Manisha Kalyan made it 3-1 for the Kozhikode side in no time after a cross from the left flank caught the Sethu defence by surprise.

The two sides shared equal percentage of ball possession in the first half but it was Gokulam Kerala who dominated in terms of attacking threat. They went on to replicate their performance in the next 45 minutes. Despite multiple opportunities, Sethu FC could not find a breakthrough. Eventually, the referee blew the final whistle and Gokulam Kerala sealed the win and the trophy.

Midfielder Dangmei Grace was adjudged the Hero of the Match for her solid display throughout the two halves. (ANI)