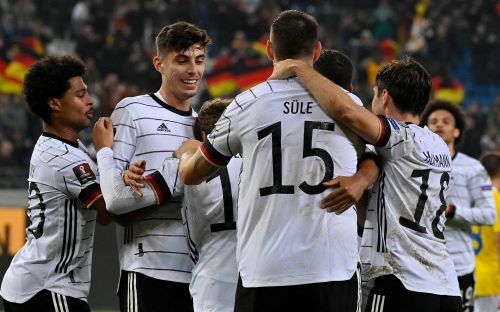 Berlin: Thomas Muller's late decider helped Germany bounce back to beat Romania 2-1 on home soil in Group J of FIFA World Cup European qualification. The hosts thought they had the golden chance to break the deadlock with a penalty in the early stage, but the referee overturned his original decision after reviewing Andrei Burca's tackle on Timo Werner inside the box.

Romania scored first with only nine minutes gone on Friday evening, when Ianis Hagi danced through Germany's defence before hammering the ball past Marc-Andre ter Stegen. Germany pressed frenetically for an equaliser, while Romania kept all their men behind the ball.

The hosts kept Romania's defence busy but Hansi Flick's men lacked in accuracy to finish the job. Serge Gnabry was the main factor in Germany's game plan and forced the visitors' goalkeeper Florin Nita into action for the first time in the 17th minute.

Gnabry remained in the thick of things as he tested Nita with an effort from a tight angle in the 35th minute before unleashing a left-footed low strike on target nine minutes later.

Germany continued to dominate after the restart and got rewarded as Gnabry eventually got his name on the scoreboard after taking advantage on Marco Reus' tee up in the 52nd minute. It was Gnabry's 20th goal in 30 international outings, Xinhua reports.

Romania couldn't hold the pace while Germany pressed relentlessly and turned things around in the 82nd minute when Muller poked home Joshua Kimmich's flicked on a corner to make it 2-1.

"I think we staged a very enthusiastic performance. We tried a lot and had to take a deficit into the break, which is of course not very satisfying, but we responded well and got rewarded after the half time," Muller said.