England's three-goal fightback from two goals down didn't earn them a home victory against Germany on Monday, as Kai Havertz's late goal, also his second in the game, saw the rollercoaster clash end in a 3-3 draw. 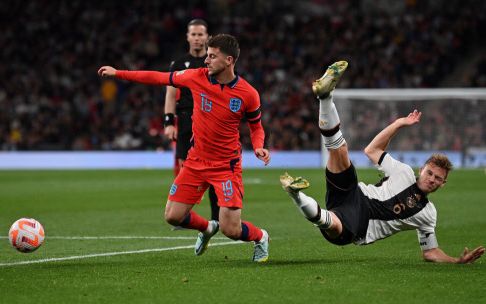 Paris: England's three-goal fightback from two goals down didn't earn them a home victory against Germany on Monday, as Kai Havertz's late goal, also his second in the game, saw the rollercoaster clash end in a 3-3 draw.

Thus, England finished their Nations League group matches with a six-game winless run, sitting at the bottom of the group, which also featured Italy and Hungary.

European champions Italy, who have failed to qualify for the 2022 World Cup, regained some pride as they won 2-0 in the battle for top spot in Budapest against Hungary, securing a place in the semifinals of the tournament, reports Xinhua. Giacomo Raspadori and Federico Dimarco scored for the Azzurri.

Unlike Italy, both England and Germany will head to the World Cup in less than two months, but both are still struggling to find their best form.

Germany's home defeat to Hungary on Friday buried their hopes of advancing as they only took one win from the six group matches -- a 5-2 victory over Italy in June.

The four-time World Cup winners looked on course for victory at Wembley Stadium after goals from Ilkay Gundogan and Havertz had put them 2-0 in front after 67 minutes.

Manchester United defender Harry Maguire, who has been criticised for poor performances in recent club matches, has had full support from head coach Gareth Southgate and started for the Three Lions again, but his latest mistake may threaten his place in the team.

The 29-year-old centre-back lost the ball to Jamal Musiala, then brought down the teenager in the box to hand the visitors a penalty, which was converted by Gundogan.

Maguire then lost his position in midfield 15 minutes later and allowed Chelsea forward Havertz to curl in a superb effort from the edge of the area.

Luke Shaw pulled one back in the 71st minute before substitute Mason Mount hit the equalizer five minutes later. Harry Kane then converted a penalty awarded by VAR in the 83rd minute to finish the incredible comeback.

But it was not the end -- Havertz pounced on a fumble by England goalkeeper Nick Pope to equalise in the 87th minute. Bukayo Saka could have killed the match in stoppage time but his close-range attempt was saved by Germany keeper Marc-Andre ter Stegen.

"A couple of errors have cost us the goals," Southgate said. "But I'll focus on the fact they played with tremendous spirit and showed a belief that we haven't shown in the last few games." IANS