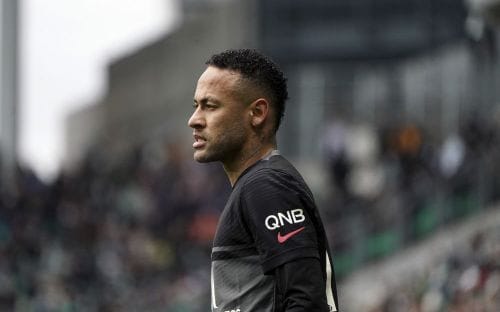 Paris: Paris Saint-Germain striker Neymar will be out of action for at least eight weeks as he was forced to leave the field on a stretcher after landing awkwardly during the Ligue 1 clash with Saint-Etienne on Sunday.

When leaping over a challenge, Neymar planted his foot onto the outstretched leg of Yvann Macon. As his ankle turned over, he screamed out in agony and immediately beckoned for medical assistance. He was later seen leaving on crutches, sparking concerns he could be sidelined for a prolonged period of time.

Reports in France were quick to suggest that the South American superstar will be missing until January, and that turned out to be the case.

"The examinations carried out to confirm that Neymar Jr suffers from a sprained left ankle with ligament injuries," PSG said in a statement issued on Monday."An unavailability of 6 to 8 weeks is to be expected. A new assessment will be made in 72 hours to specify the recovery."

"Unfortunately, these setbacks are a part of an athlete's life. Now you have to raise your head and move on. I will come back better and stronger," Neymar posted on Instagram.

If the 29-year-old is to miss the next six weeks, then he will be forced to sit out domestic meetings with Nice, Lens, Monaco, and Lorient before the Ligue 1 winter break, along with the final Champions League group stage clash with Club Brugge.

Neymar will likely return at the beginning of February, in time for the start of the Champions League knockout stages, with PSG already qualified as runners-up in Group A behind Manchester City.