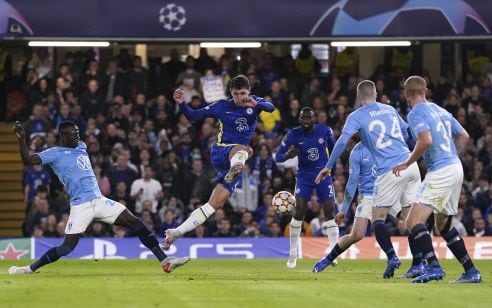 Lukaku appeared to hurt his right ankle getting fouled for a penalty that was converted by Jorginho for the second goal in the 21st minute, adding to the opener volleyed in by Andreas Christensen in the ninth minute. The Belgium international initially tried to play on but before long was signaling to be substituted.

Werner, the strike partner of Lukaku, then had to come off with an apparent hamstring injury just before halftime at Stamford Bridge.

Kai Havertz came on as the replacement for Lukaku and lifted a deft finish over the goalkeeper for the third goal in the 48th minute at the end of a breakaway led by fellow substitute Callum Hudson-Odoi.

Jorginho eschewed his trademark penalty routine — the hop, skip and sidefoot shot — for his first-half penalty and he repeated that with another spot kick in the 57th minute to make it 2-0 after a foul on Antonio Rudiger.

The result of the spot kick was the same, with Jorginho curling a shot right down the middle.

Chelsea bounced back from a loss at Juventus in the second round of games and is in second place in Group H, three points behind the Italian team and three ahead of Zenit St. Petersburg.