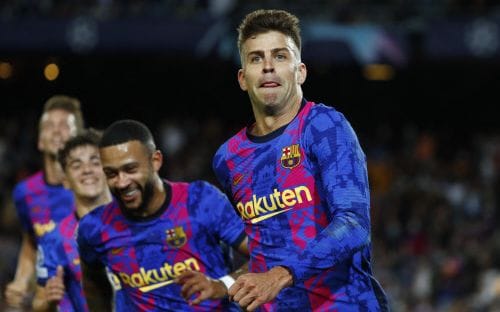 Gerard Pique celebrates with his teammates I AP

Barcelona: Gerard Pique sparked Barcelona's flailing Champions League campaign into life on Wednesday by scoring the only goal in a 1-0 win over Dynamo Kiev, a victory that was witnessed by a half-empty Camp Nou.

The attendance was recorded at 45,968, with several blocks of seating filled by only a handful of supporters for a game coach Ronald Koeman said the team had to win to have any chance of reaching the last 16.

After losing both of their opening games in Group E 3-0 to Bayern Munich and Benfica, Barcelona needed victory to resuscitate their chances of progress and avoid the embarrassment of going out in the group stage for the first time since 2000.

Pique at least ensured the job was done in that regard, his close-range finish towards the end of a dreary first half enough to get Barca up and running, with a crucial game away in Kiev now to come in two weeks' time.

Before then, they face Real Madrid in the first Clasico of the season on Sunday, when another win would make it a hugely positive week for Koeman, whose future looked bleak when the team lost to Atletico Madrid before the international break.

That game will also be at Camp Nou and it remains to be seen if the number of Barcelona fans in attendance improves.

An early kick-off may well not have helped and there is undoubtedly still some nervousness lingering from the Covid-19 pandemic, both locally and among travelling supporters.

But it is hard not to conclude fans are also less enthused by a team that lost Lionel Messi in the close season and had lost their last three Champions League matches in a row at home, as many as they managed in the previous 74.

Pique's goal made him Barcelona's oldest ever Champions League goalscorer at 34 years and 260 days old but the most excitement these days surrounds the 18-year-old Ansu Fati, who is expected to ease fears around his future by signing a new contract on Thursday.

Fati, whose deal currently expires at the end of the season, is still being eased back into action after 11 months out with injury.

He came on as a substitute after starting against Valencia on Sunday and, presumably, with greater involvement planned against Real Madrid this weekend.

"He's still lacking a bit and that's normal," said Koeman. "You have to think that he has been away for a long time. He needs time, to improve in every way."

Barcelona could have been ahead inside two minutes but Sergino Dest, playing on the right of the front three instead of right-back, nodded over from a yard at the back post.

Luuk de Jong also headed over the kind of chance he is in the team to score but Barca hardly deserved the lead, their play stunted and hesitant, lacking any of the fizz expected of a side trying to stay in the competition.

The crowd were as flat as the team, neither one really encouraging the other, until the sight of Fati emerging down the touchline to warm up suddenly raised the fans from their stupor.

The players felt it too, the buzz reaching them on the pitch, and within moments Pique was left free at the back post to meet Jordi Alba's cross on the half-volley, the ball flying in.

Fati came on with Philippe Coutinho at half-time and should have scored. He earned the chance by rushing Dynamo goalkeeper Georgiy Bushchan but had his back to goal when Memphis Depay hooked it back to him. Fati could have laid back to Coutinho but instead scooped the ball up and flicked wide.

The game drifted and without a second goal, Barcelona briefly grew anxious. A better opponent might have turned the screw in the latter stages but Dynamo never created the decisive chance and Barca sealed a much-needed win.