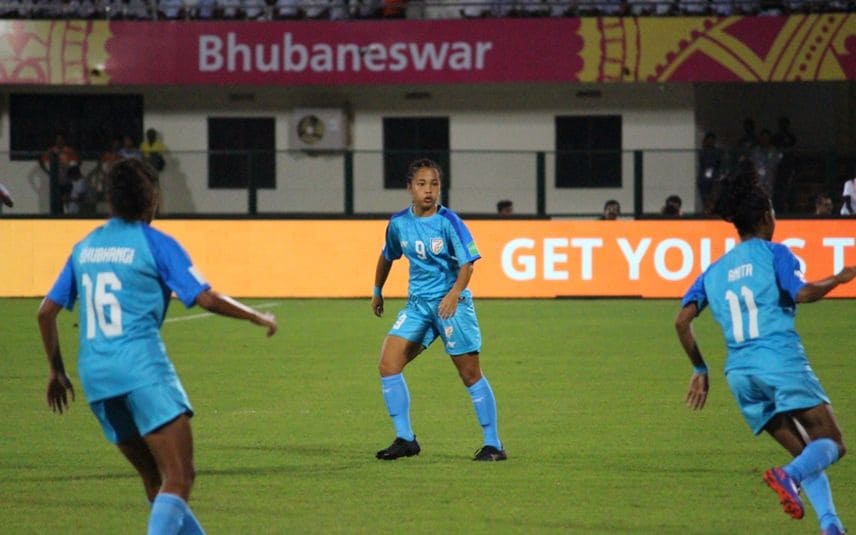 Bhubaneswar: Indian under-17 women's football team started their FIFA under-17 Women's World Cup 2022 campaign with a 0-8 defeat to USA in their campaign opener at Kalinga Stadium in Bhubaneswar on Tuesday, which is Indian women football team's biggest defeat in under-17 category.

This thrashing has put India at the bottom of Group A while USA is at the top. In the other Group A match, Brazil managed a narrow 1-0 win over Morocco and is at second place.

It is USA's biggest win at the FIFA U-17 Women's World Cup.

The minister also watched the match between India and USA. Union Minister for Education, Skill Development and Entrepreneurship Dharmendra Pradhan and Minister for Law and Justice Kiren Rijiju also attended the inaugural ceremony of the World Cup.

"A historic moment for Indian Sports as India hosts the FIFA #U17WWC for the very first time. My heart is filled with pride as our U17 women footballers line up for their first-ever FIFA World Cup match. I urge the entire nation to come together and support our girls Jai Hind," tweeted the minister. India is hosting the FIFA U-17 Women's World Cup 2022, organized at three venues.

The matches will be played at Kalinga Stadium in Bhubaneswar, PJN Stadium in Goa and DY Patil Sports Stadium in Navi Mumbai.

As many as 16 nations will be taking part in the grand sporting event which will continue till October 30. The seventh edition of the prestigious tournament has four groups - A, B, C and D - and Navi Mumbai is set to host the grand final on October 30.

The FIFA U-17 Women's World Cup India 2022 will see three former champions in France, Japan and Spain take the field. Canada, Germany and New Zealand - along with Japan - will continue their proud record of participating in every edition of this spectacle.

Hosts India are the debutants in this edition of the World Cup. After boys in 2017, it is now the turn of India's U-17 women's team to make it big in the tournament. (ANI)