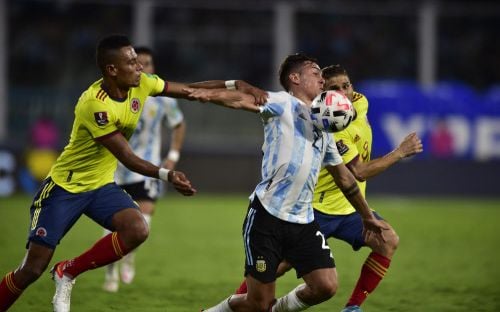 Paulo Dybala, center, controls the ball during the match | AP

Sao Paulo: Colombia will need a miracle to play in the next World Cup after its 1-0 loss to Argentina in South American qualifying on Tuesday.

Lautaro Martinez scored the only goal of the match in Cordoba in the 29th minute after he was left alone in the penalty box by two Colombia defenders. Goalkeeper Camilo Vargas made several important saves, including three shots by veteran Ángel di Maria.

Argentina did not count on superstar Lionel Messi, who is still recovering from COVID-19. But the team — and Brazil — have already secured their places in the World Cup.

Colombia is in seventh place with 17 points. Peru, currently in fifth place with 20 points, will play later against Ecuador in Lima. If the Peruvians win, the closest rival to Colombia in a qualifying position will be Uruguay, with 22 points.

Uruguay has two games left: Peru at home and Chile away. Colombia's last rivals are less dangerous, Bolivia at home and Venezuela away.

South America has four direct spots in the World Cup. The fifth position will play an international playoff against an Asian team for a berth.

Earlier, Chile beat Bolivia 3-2 in the altitude of La Paz thanks to two goals by Alexis Sánchez and another by Marcelino Núñez. The result kept the Chileans in contention in sixth place with 19 points and nearly ended the chances of the hosts, who remain with 15 points. The Bolivian goals came from Marc Enoumba and Marcelo Martins.

“This was a reward to our efforts, but it doesn’t finish here,” Chile striker Sánchez said.

Chile's final challenges will be at Brazil and home against Uruguay.

The Uruguayans gave new coach Diego Alonso his second consecutive win on the job — a 4-1 hammering of Venezuela. Rodrigo Betancur, Giorgian de Arrascaeta, Edinson Cavani and Luis Suarez all scored for Uruguay. Venezuela's only goal was from Josef Martinez.

Later Tuesday, leader Brazil will face ninth-place Paraguay. Third-place Ecuador could secure its direct spot with a win at Peru.

The two final rounds of South American qualifiers will be played in the end of March.