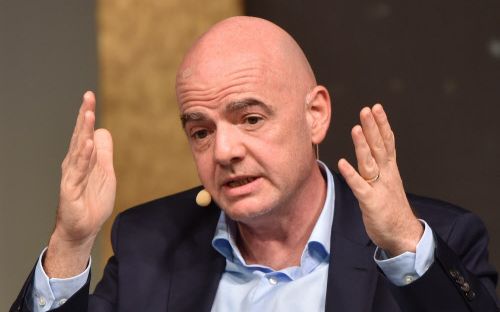 Strasbourg: FIFA president Gianni Infantino seemed to establish a link on Wednesday between his plan for a World Cup every two years and the tragedy of migrants in the Mediterranean who must be "given hope", before saying his remarks had been "misinterpreted".

The head of world football told the Parliamentary Assembly of the Council of Europe (PACE) in Strasbourg that the sport is currently going "in a direction where a few have everything and the vast majority have nothing".

"I understand in Europe the World Cup takes place twice per week, because the best players are playing in Europe," said Infantino.

"But if we think about the rest of the world... which doesn't see the best players, which doesn't participate in the top competitions, then we have to think about what football brings, which goes beyond the sport."

The idea of a World Cup every two years, rather than every four as it has been since 1930, has faced a hostile reception from the European and South American federations as well as the big clubs. But it enjoys the unanimous support among the 54 African federations.

"We need to include them, we need to find ways to include the entire world, to give hope to Africans so that they don't need to cross the Mediterranean in order to find maybe a better life, but more probably death in the sea.

"We need to give opportunities, and we need to give dignity, not by giving charity but by allowing the rest of the world as well to participate."

His comments were swiftly criticised on social media.

"My colleagues at Human Rights Watch interview refugees around the world pretty much every day. We write reports about the reasons -- the abuses, the hardships -- that forced them to leave their homes. They never mention the timing of World Cup tournaments," tweeted Andrew Stroehlein, media director at HRW.

"How low can Infantino go? Instrumentalising death in the Mediterranean to sell his megalomaniac plan is beyond words," he tweeted.

That gave rise to a clarification by Infantino in a statement sent to AFP.

"Given that certain remarks made by me before the Council of Europe earlier today appear to have been misinterpreted and taken out of context, I wish to clarify that... my more general message was that everyone in a decision-making position has a responsibility to help improve the situation of people around the world," said Infantino.

"If there are more opportunities available, including in Africa, but certainly not limited to that continent, this should allow people to take these opportunities in their own countries.

"This was a general comment, which was not directly related to the possibility of playing a World Cup every two years."