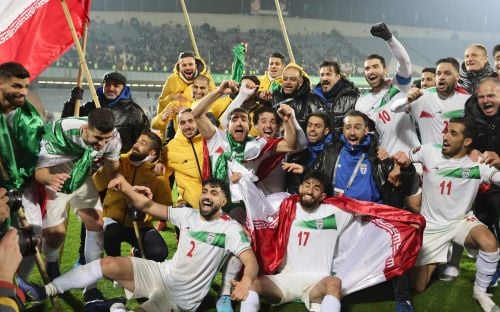 Tehran: Iran became the first team from Asia to qualify for the 2022 World Cup finals on Thursday with a 1-0 victory over Iraq.

Porto forward Medhi Taremi scored the winner after 48 minutes in Tehran to send his country through to a World Cup finals for the sixth time, and third in a row.

Iran consolidated top spot in Group A with 19 points from seven games, two points ahead of South Korea who are on the brink of qualifying after a 1-0 win over Lebanon in Sidon.

The United Arab Emirates are in third position, eight points behind the Koreans -- who are missing injured Spurs star Son Heung-min -- after a 2-0 win over Syria.

In Group B, Japan took a step closer to Doha with a 2-0 win over a toothless China, and are sitting second, two points behind leaders Saudi Arabia.

Australia are third, a further point behind Japan, to stay in the hunt an automatic berth with a comfortable 4-0 home win over Vietnam in Melbourne.

Only the top two are guaranteed a place at the World Cup that kicks off in Qatar in November.

There were celebrations and fireworks in Tehran after the final whistle with loud cheers from spectators as women were allowed entry to an Iran football match for the first time since October 2019.

"I am very happy. This is the first time I have attended a match at Azadi Stadium," said a 26-year-old civil engineer who gave her name only as Mahya. She carried the national green, white and red flag, and covered her head with a grey scarf.

World football's governing body FIFA ordered Iran in September 2019 to allow women access to stadiums without restriction and in numbers determined by demand for tickets.

Iran extended their impressive unbeaten run under Croatian head coach Dragan Skocic with 11 wins and one draw, with their second win over Iraq on the road to Qatar.

The Iraqis struggled for momentum and failed to break down the famed Iranian defence, with the hosts clearly the dominant side on front of their home fans.

Taremi, who only joined his Covid-hit team in Tehran on Thursday, picked up an Alireza Jahanbaksh assist after the break sending in a right-footed shot from inside the box.

In Saitama, Yuya Osako buried a first-half penalty to put four-time Asian champions Japan in control before Junya Ito doubled their lead after the break.

Japan were missing half their regular defence against China, with captain Maya Yoshida and Arsenal full-back Takehiro Tomiyasu both missing through injury.

But the home side took a 13th-minute lead after China defender Wang Shenchao slid in to block Ito's cross but hit the ball with his arm.

Osako made no mistake from the spot and the hosts pressed home their advantage in the 61st minute when Ito rose to head home substitute Yuta Nakayama's cross.

China, who were playing their first game under new manager Li Xiaopeng, saw their slim hopes of reaching the World Cup all but ended.

"The players gave their all but the first goal came at a bad time for us and it threw us out of our rhythm," said Li, whose side failed to have a shot on target.

"It had a really big impact."

Japan's fourth win in a row kept the pressure on Saudi Arabia, who they host at the same stadium next Tuesday.

"Looking ahead to the Saudi game, tonight's match has helped strengthen our understanding as a team and that's a big plus for us," said Japan manager Hajime Moriyasu.

"But the Saudi game will have a different intensity and tension from tonight, and we have to be ready to play at a high level."

Australia are also in the chase.

In Melbourne, Jamie McLaren opened the scoring in the 30th minute before Tom Rogic notched a second in first-half injury time.

Craig Goodwin and Riley McGree added two more after the break to wrap up the win for the home side, whose manager Graham Arnold was absent after testing positive for Covid-19.