With the league now facing another year without a serious title race and a decade of dominance from the Bavarian giants, questions are being asked about the possibility of a new format. 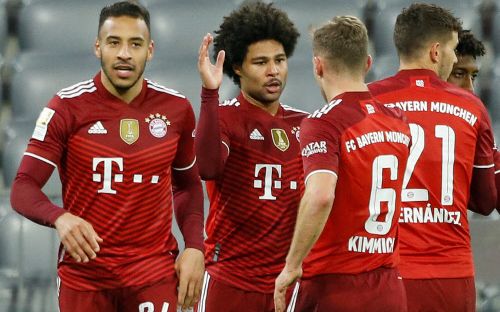 Berlin: As Bayern Munich continue their march towards a tenth successive Bundesliga title this weekend, the German top-flight has been gripped by a debate about whether to introduce end-of-season play-offs to make the league more exciting.

Julian Nagelsmann's Bayern are currently nine points clear at the top of the table, a lead they are expected to defend when they travel to minnows Bochum on Saturday.

With the league now facing another year without a serious title race and a decade of dominance from the Bavarian giants, questions are being asked about the possibility of a new format.

"There are no taboos for me. If play-offs will help us, then we'll talk about play-offs," new German Football League CEO Donata Hopfen told Bild newspaper in an interview last Sunday.

On Wednesday, she got some unlikely support from Bayern, the club who would in theory have most to lose from a new format.

"A format with semi-finals and a final would mean more excitement for the fans, so it makes sense to explore these ideas. We're always open to new suggestions," Bayern CEO Oliver Kahn told Kicker magazine.

German football decided its champions via a system of regional leagues and national play-offs until the Bundesliga was created in 1963, and smaller European leagues such as the Belgian Pro League have introduced a play-off system in recent decades.

The Bundesliga would be the first major European league to introduce such a format, however, and the suggestion has also been met with scepticism in some quarters.

Kicker reported that the majority of Bundesliga clubs are also against the idea, naming Bayer Leverkusen, Eintracht Frankfurt and Union Berlin as examples.

But whether with a format change or more regulation, the league is beginning to acknowledge that Bayern's hegemony is becoming a serious problem.

Bayern are without captain and goalkeeper Manuel Neuer this weekend, who is recovering from minor knee surgery, but are still expected to cruise to an 18th win of the season against Bochum.

Dortmund are hoping to bounce back when they visit high-fliers Union Berlin on Sunday.

Dortmund CEO Hans-Joachim Watzke has traditionally been among those against a format change, but he struck a more equivocal note this week.

"I have never been a fan of play-offs, but given the current situation, we can't afford to have any fundamental red lines," he told Kicker.

The Cologne coach went viral last week when his family posted a video online of him watching his team from the living room while in self-isolation with coronavirus.

The clip showed Baumgart yelling at the screen and jumping around the room in excitement and frustration, prompting a rather concerned reaction from his dog.

Luckily for the dog and for Cologne, Baumgart has now tested negative and will be back in the dugout when his side travel to Leipzig on Friday.

The 50-year-old former Union Berlin player is always energetic on the touchline, and the cameras are likely to pay even closer attention to him this weekend.

4 - Borussia Moenchengladbach's current run of back-to-back home defeats. They could equal a club record with another loss against Augsburg on Saturday.