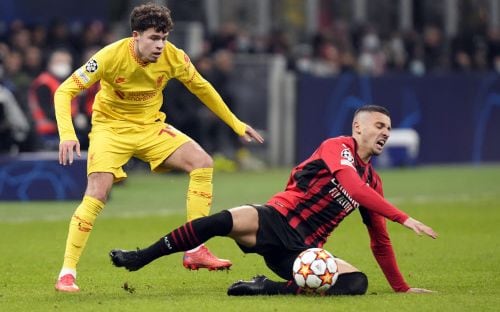 Milan: Liverpool made it a perfect six Champions League wins from six on Tuesday with a 2-1 victory at AC Milan which knocked one of Europe's most storied clubs out of continental competition for another season.

Fikayo Tomori had given Milan, who needed to win and a favourable result between Porto and Atletico Madrid, hope they could make the last 16 with his tap-in just before the half hour mark at the San Siro.

But a quick reply from Mohamed Salah and Divock Origi's nodded finish 10 minutes after the break ensured Jurgen Klopp's side, missing a raft of starters, finished Group B on 18 points, the first English team to achieve that total.

"It's an exceptional performance... with that many changes, the boys have to be confident enough to show how good they are," Klopp told reporters.

"I saw so many good things tonight it was unbelievable."

Serie A leaders Milan, who were missing half their starting back four and other first team players including forwards Rafael Leao and Ante Rebic, were condemned to last place thanks to Atleti's 3-1 win at Porto which put the La Liga side through in second behind Liverpool.

Defeat for Milan ensured they failed in their attempt to make the Champions League knockouts for the first time since 2013 and leaves them without even Europa League football in the new year.

"We need to put this anger and frustration aside as we know we have developed as a team," said Milan's Alessandro Florenzi.

"If you look at our defeats they were not heavy losses, they were all one goal defeats... Tonight we were on an equal footing with a great team.

"We are a level below Europe's best sides but it's a gap that we can close."

Stefano Pioli's side have been revitalised over the last two years and look an accomplished side domestically but they were punished for picking up just one point from their first four group matches.

Klopp made a raft of changes from the Reds side which squeezed past Wolves at the weekend but there was still an obvious gulf in class between the two teams.

Milan struggled to put a second-string Liverpool team under much pressure in the tame opening stages as the home crowd roared for their players to attack.

The closest either side came to scoring was a Tomori header in the eighth minute that Alisson Becker had no trouble saving, while Neco Williams' shot two minutes earlier dribbled into Mike Maignan's arms.

Out of nowhere the San Siro exploded into life thanks to Tomori's 29th-minute opener, which fell to him on a plate after Alisson could only pat the ball out to the England international.

However their joy only lasted six minutes as Salah netted his 20th goal of the season, pouncing after Alex Oxlade-Chamberlain did brilliantly to wriggle free and fire a stinging shot at Maignan.

And Milan's hopes of making it through all but vanished 10 minutes after the break as Origi looped home Liverpool's second on another rebound, this time from Sadio Mane's shot after Tomori gifted the Senegal forward possession on the edge of his own box.

From there Liverpool easily held off the home side, with Alisson rushing out to block Franck Kessie's finish when put clean through the only real danger Milan managed to pose with five minutes remaining.