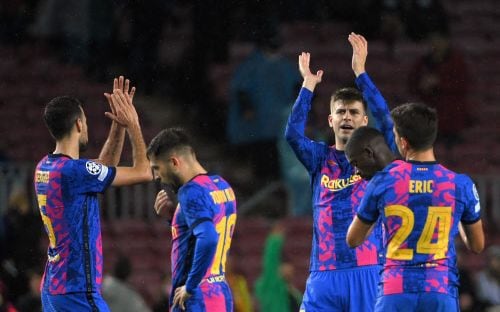 Barcelona: Barcelona's hopes of qualifying for the Champions League last 16 go down to the final Group E matchday after an entertaining 0-0 draw against Benfica on Tuesday.

With Xavi Hernandez taking charge of his second game since replacing Ronald Koeman in the Barca dugout, the Catalan side produced a performance a world apart from the sorry outfit Benfica saw off 3-0 in Lisbon in September.

A win would have earned Barca qualification alongside Bayern Munich, whom they must now beat on December 8, if Benfica down Dynamo Kiev, to progress.

In torrential rain, the Xavi-invigorated hosts were dripping with newfound intensity and pace.

Only the woodwork denied teenager Yusuf Demir late in the first half.

The winger, on loan from Rapid Vienna, curled a shot from inside the penalty area to beat Odysseas Vlachodimos, but not the crossbar.

In front of almost 50,000 fans braving a wintery evening in Catalonia, Barca emerged for the second period in dominant mood, but Benfica held firm.

The Portuguese visitors' coach Jorge Jesus freshened up his team on the hour, Darwin Nunez coming on for Yaremchuk and Adel Taarabt for Joao Mario.

On 68 minutes Frenkie de Jong's header had 'opening goal' written all over it, only for Vlachodimos to tip the ball over the bar.

With the clock ticking down, Ronald Araujo thought he had delivered the decisive moment but his effort seven minutes from time was ruled offside.

Four minutes of injury time proved no place for the faint-hearted, as both sides went all out for the winner.

And Benfica it was who almost got it, Jesus crumpling to his knees after watching Haris Seferovic fluff a great chance with only Ter Stegen to beat.

As it was, the stalemate left Barca in second on seven points, two ahead of Benfica, and their Champions League fortunes resting on a result in Munich in two weeks' time.