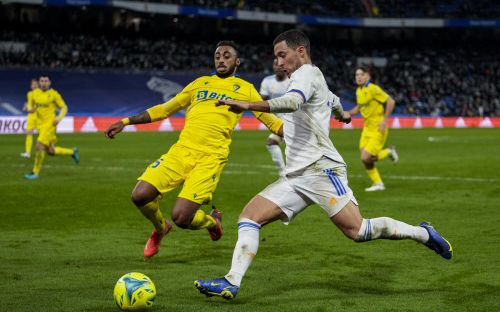 Eden Hazard in action during the match | AP

Madrid: Eden Hazard started for the first time since September on Sunday but Liga leaders Real Madrid were denied an 11th consecutive victory as they were held to a frustrating goalless draw with Cadiz.

A spate of positive Covid tests prompted coach Carlo Ancelotti to bring Hazard in from the cold yet his team could not find a way through against a determined Cadiz side at the Santiago Bernabeu.

"We lacked a bit of quality in the final third but we played well, it was just there were no spaces," said Ancelotti. "These are the games we struggle with most."

The stalemate reduced Madrid's lead at the top of La Liga from eight points to six at the end of the weekend, after second-placed Sevilla snatched a late victory over Atletico Madrid on Saturday.

Three straight league defeats means Atletico, the defending champions, are now 14 points off the top while Barcelona, who beat Elche on Saturday, are seventh, 16 points adrift.

Hazard's last start for Madrid had come in the humiliating Champions League defeat by Sheriff Tiraspol on September 21, with the Belgian's season again interrupted by injury and a lack of fitness.

But form has been a key factor too, after Ancelotti stated clearly he "prefers other players" while admitting Hazard would have to show patience and perseverance to earn back his place.

Hazard could even depart as early as January if a significant bid arrived but this was an encouraging night for the 30-year-old, who made little impact from the right wing in the first half but improved immeasurably when moved more centrally in the second.

"It took him a bit of time to get into the game, he did better in the second half," said Ancelotti.

"He is not so used to playing close to the wing, on the right, but inside he combined very well with Karim (Benzema). Hazard can be one more weapon for the second half of the season."

It remains to be seen if any of of Marco Asensio, Rodrygo and Gareth Bale - all unavailable due to positive Covid tests - are available for Wednesday's game away at Athletic Bilbao, but Hazard will hope he did at least enough to continue his latest attempt at a revival.

Luka Modric was also absent, allowing Fede Valverde a chance to impress in midfield, but Madrid missed the Croat's creativity, especially early on.

If either team were lucky in the opening 45 minutes it was Real Madrid, who could have been reduced to 10 men when Casemiro was only shown a yellow card for a leaping, two-footed challenge from behind on Alejo.

Madrid controlled the contest but struggled to break down Cadiz, who limited their opponents to speculative crosses and optimistic efforts from distance. Valverde went closest with a stinging long-range drive.

Hazard was virtually anonymous in the opening 45 minutes, without a single shot, cross or key pass from out on the right wing, where he looked lost and isolated.

But he drifted more centrally in the second half, with Vinicius Junior and Karim Benzema ahead of him, and suddenly there was more of a spark.

In the 50th minute, Hazard brushed a sumptuous flick into Benzema and span away for the return, his attempted cross for Vinicius cut out. He rolled away from his marker and skipped past another and then should have scored, flicking a header wide after being picked out by Toni Kroos.

The game was still goalless with 20 minutes left as Ancelotti throw on Luka Jovic for Valverde. Cadiz had arguably the best chance but in space just eight yards out, Alvaro Negredo fired wide.

Madrid poured forward with Benzema weaving through before scooping over. The Frenchman then had a dipping free-kick scrambled away.

Hazard chested down in the box in injury-time but the ball would not drop fast enough for him and Cadiz survived.

Liverpool: Frustration but no moaning from Jürgen Klopp, even after a title setback for Liverpool.Klopp's side being held 1-1 by tactically disciplined ..

London: Manchester United crashed to a dismal 4-0 defeat at Brighton that ended their hopes of finishing in the Premier League's top four, while Chelsea ..

London: Chelsea FC said a group led by Los Angeles Dodgers co-owner Todd Boehly would acquire the London club after agreeing terms in a deal worth £4 ..