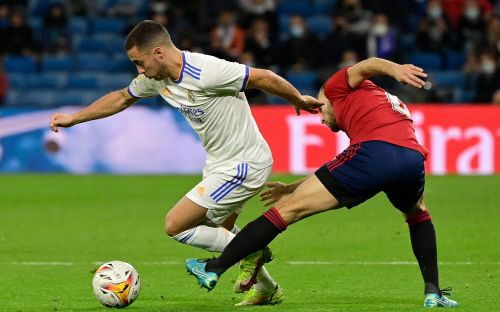 Madrid: Carlo Ancelotti admitted on Friday that Eden Hazard is unhappy with his lack of playing time at Real Madrid.

Hazard has not started any of Madrid's last six matches and he was an unused substitute on Wednesday in the Champions League victory over Shakhtar Donetsk.

The 30-year-old is fit again after an injury-plagued two years in Spain but he is not in favour under Ancelotti, who said last month he "prefers other players".

"The player is not happy," said Ancelotti in a press conference on Friday, ahead of Madrid's game at home to Rayo Vallecano on Saturday in La Liga.

"It may be tomorrow or it may not. The important thing is that he is focused. I feel sorry because it's easy to put a player on the bench who is not professional, but he is."

Ancelotti recalled feeling angry as a player when he was left out at AC Milan. "I would get angry with (Fabio) Capello when he didn't play me and he told me that when I was a coach, I would understand. Now I understand it very well," Ancelotti said.

Gareth Bale is also fit again after two months out with a hamstring injury but Ancelotti said he is not ready to be included in his squad this weekend.

But Bale is expected to join up with Wales next week, ahead of their crucial World Cup qualifiers against Belarus and Belgium.

"They will evaluate if he is there to play or not. It depends a lot on how the player feels," said Ancelotti.

"If the national team calls him, we have the obligation to send him, explaining in detail what has happened. He has only been training with the group for two days.

"The national team has a week to assess his condition. Neither of them will take risks if he is not fit."

Madrid: Karim Benzema scored an extra-time penalty as Real Madrid pulled off another astonishing comeback in the Champions League to stun Manchester City ..

New York: The jersey that Argentina football legend Diego Maradona wore while scoring twice against England in the 1986 World Cup, including the infamous ..

New Delhi: With an instruction from higher authorities to "go deep into the details", the Comptroller and Auditor General of India (CAG) on Wednesday ..